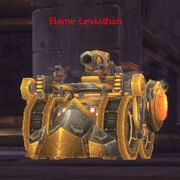 Flame Leviathan is the first boss encounter in Ulduar, found in the Formation Grounds. Most of the players in this encounter do not use their regular class abilities, but instead use vehicles (similar to drakes in Malygos' third phase). The rest of Ulduar is not accessible until this boss is destroyed.

This massive armored tank guards the courtyard entrance in Ulduar. The watcher Mimiron constructed the Flame Leviathan as part of his V0-L7R-0N weapons platform.[1]

Talking to Lore Keeper of Norgannon at the Expedition Camp will activate the Keeper's Towers. Any Tower that remains active when Flame Leviathan is engaged will enable additional abilities.

Between the Expedition Base Camp and the area Flame Leviathan is staging there is a large number of trash mobs and structures. Many of the structures start spawning Steelforge Defenders when a player comes within range until they are destroyed. Destroying certain structures (most notably the Hard-Mode towers) sometimes spawns additional enemies which may attack from behind.

The encounter is started by either talking to the Lore Keeper of Norgannon or Brann Bronzebeard. When talking to Brann, all Defense Towers are inactive and hard mode cannot be invoked. After talking to the Keeper, all four towers are active which is the most difficult form of hard mode. The towers can be individually switched off by destroying them. If all four are destroyed, the encounter is equivalent to normal mode. More loot is gained if more towers are up when the Flame Leviathan is defeated. The extra hard mode loot is gained only with all four towers up.

Each tower not destroyed increases Flame Leviathan's health by 40% (multiplicative).

Additionally each tower has an individual ability which is activated shortly after the fight starts in addition to buffs and debuffs per individual tower:

After the last row of Storm Beacons there is a row of normal pillars. Beyond this is a roughly square room clear of all obstacles which contains a group of mobs guarding a gate. After this group is killed, the gate opens and Flame Leviathan enters. It is a good idea to kill the mobs from range, so that player vehicles are in a safe distance from Flame Leviathan when it enters.

While mobile, the boss always targets one Siege Engine or Demolisher and tries to ram it (which causes very high damage if successful). The targeted player must kite the boss, preferably using one of the speed boost abilities. The normal kite path is a wide circle along the outer edges of the area. Every 30 seconds, the boss switches to a different target, it also switches when its current target is destroyed.

The main role of choppers is to drop Tar in front of the boss as much as possible. Dps boss with Sonic Horn only when Tar is on cooldown.

Demolishers are ranged damage dealers. For normal mode, keep hurling Boulder at boss is good enough for the driver. Hurling Pyrite Barrel can do more damage but is not necessary. Since hurling Pyrite Barrel consumes pyrite, it is advisable for less experience group not to use Hurling Pyrite Barrel and save the pyrite for Increased Speed. The passenger can damage boss with the Mortar.
Demolishers should stay at range from the boss all the time, they are rather fragile and move slowly.
Demolisher gunners can simply shoot at the boss using the Mortar. When the Demolisher is chased and Flame Leviathan gets too close, the passenger should use Speed Burst.

Siege engines are melee damage dealers and interrupters. Stay near the boss and dps with Ram and Fire Cannon. The driver must take care to save some steam pressure to interrupt boss' Flame Vents with Electroshock.
When the boss is about to switch target (some addons such as Deadly Boss Mods give a 5 seconds warning), siege engines should start moving away from the boss. If a siege engine is targeted by the boss, it should start running away from the boss immediately. The driver can use Steam Rush repeatedly. When the boss gets too close, the passenger should use Shield Generator. Keep kiting until the boss change target.

The simplest way to defeat Flame Leviathan (and most common in ten-man pugs) is to spam him with Pyrite barrels. Before pulling the last group of trash in front of the gate, the raid should sit at the entrance to the courtyard while Demolisher and Siege Engine gunners shoot down as much Pyrite as they can. After about a minute the area should be littered with enough barrels that Demolishers can attack solely with Pyrite without having to worry about running out of ammunition. Demolisher gunners should concentrate on keeping Pyrite stocks up, Choppers and Siege Engines should attack the boss as usual.

Drivers will still have to be aware if they are being targeted and run away as necessary, but as Flame Leviathan will only last around a minute in normal mode under sustained Pyrite fire, he won't have time to change targets more than once.

With towers up, the encounter gets increasingly difficult. To beat it, two additional elements compared to normal mode need to be considered: Shutdown and Pyrite. The fight can be simplified by just using Pyrite, but (depending on gear) it may be neccessary to use Shutdown, and then a rather complex choreography needs to take place.

Demolisher drivers can shoot pyrite. This causes a stacking DoT on Flame Leviathan, which at 10 stacks deals about 100-150k damage per tick. In hard mode, all other sources of damage can be ignored, as long as the Demolishers keep the pyrite stacks rolling. To make this possible, the Demolisher gunners must supply their drivers with pyrite. They must shoot it from the sky, and collect it with Grab Crate. The drivers must move so that they are close to pyrite on the ground.

Demolisher gunners can load themselves into the Demolisher's main catapult. The driver can then launch them so that they land on top of Flame Leviathan, near one of the

Leviathan Defense Turrets. There are 2 turrets in 10-player mode, 4 in 25-player.

Once the launched player lands atop the Leviathan he will be unable to move and will only be able to melee the turret closest to him. Ranged classes can reach all turrets, so ranged DPS classes are almost always the ones thrown. The turrets will defend themselves with a flame attack, which while not powerful can be problematic. Having a ranged DPS class that can also heal (such as an Elemental Shaman or Moonkin Druid) can help.

The players may eject at any time to be parachuted the ground, although doing so before the Leviathan shuts down is often fatal due to the Leviathan's constant AoE. Players can then jump back into vehicles. Motorcycles, with their sidecars empty, can easily pick up former gunners and ferry them back to their Demolisher seat.

After all turrets are destroyed,and Flame Leviathan goes into an 8 second shutdown, during which it stops moving or dealing damage, uses no abilities, takes 50% more damage and resets the Gather Speed buff stack.

Shutdown is a highly desirable state, but shooting a Demolisher gunner means he no longer gathers pyrite for that Demolisher. A Demolisher can store enough pyrite for 10 shots. If the driver is conservative and shoots only once every 9 seconds just so the debuff stays up, the stock lasts a minute and more, which is in theory ample time for the gunner to destroy the turrets and resume collecting pyrite. In practise, drivers like to have a twitchy trigger finger, and collecting pyrite requires manoeuvering, so it may in effect take longer and the pyrite stack goes down.

In 10 player, one chopper is not used, and that player is used as second gunner in one demolisher.

In 25 player, various combinations are possible. If two damage dealers are enough to bring all turrets down fast enough, two choppers can be abandoned and two demolishers get a second gunner. If three damage dealers are needed, one chopper and one Siege Engine are left empty.

The Flame Leviathan on live servers targets Demolishers as well as Siege Engines. On PTR builds, it only targeted Siege Engines. This was thought to be a bug, but was confirmed to be working as intended.[2]

Currently (2009-06-26) drivers of Demolishers can no longer change seats to either hook their own Pyrite or use the Speed Boost. Upon changing seats (via clicking the open space or change seat key binding), the Demolisher sometimes despawns and the player then dies from Flame Leviathan's AoE effects.

Going through the barrier

It has been reported that if somebody in the raid group pulls the Flame Leviathan while others are left behind the barrier, the boss may go through the barrier and be killed outside anywhere in the instance. After going through the barrier it may attack empty vehicles and players entering the instance while not in combat. Be advised though, that this is considered an exploit and a bannable offense.

This may have been repaired through an undocumented fix as the Flame Leviathan will now reset several seconds after being pulled through the barrier that prevents players from leaving/entering the battle zone. The fix may have been to prevent this glitch and to provide a soft reset for this boss should a vehicle be accidentally left behind the barrier.

The amount of Runed Orbs and Recipes obtained at various difficulty levels is uncertain. You can help collecting data. See the talk page

Leaving towers up for hard mode rewards progressively better loot. Flame Leviathan also has a standard Heroic Ulduar Boss chance of dropping a runed orb, a crafting recipe, and a

[Fragment of Val'anyr]. It has been confirmed that you can have multiple recipes and runed orbs.

The amount of Runed Orbs and Recipes obtained at various difficulty levels is uncertain. You can help collecting data. See the talk page

Engineers with skill 415 or higher can salvage parts from Flame Leviathan.

The amount and type of salvage obtained at various difficulty levels is uncertain. You can help collecting data. See the talk page

At least one Tower active
Flame Leviathan yells: Orbital countermeasures enabled.
Bronzebeard Radio says: Watch out! Our air scouts report that the generators for the missile silos are coming online!

Great job with that metal monstrosity. There appears to be only a few more obstacles in our way.

Once you clear out that clanking robot at the end of the hall, we'll be inside Ulduar.

We also noticed an enormous, fire-breathing protodrake and a molten giant. They aren't in our way, though, if you'd like to just avoid them.