A flesh giant in Northrend.

The term flesh giant refers to two different creations of the Scourge. 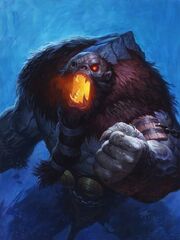 A flesh giant in Hearthstone.

The same dark sorcery used to command the Scourge's powerful abominations was utilized to even greater effect in the harsh and distant realm of Northrend. Here the Lich King focused his malefic powers on flesh giants: nightmarish creatures that make abominations look tame by comparison.

Scourge minions assembled flesh giants and abominations in a similar manner, piecing them together out of body parts from numerous corpses. Unlike abominations, though, the "spare parts" used to create flesh giants were harvested from multiple types of fearsome Northrend giants. These living battering rams employed tremendous brute strength in carrying out the inexorable will of their loathsome master.[1]

Flesh giants can be constructed from the pieces of vargul.[2]

A little-known quality of the flesh giants is that their spinal fluid interacts with the plague in a very interesting way, turning it into a corrosive acid.[3]

A priest killing a flesh giant. 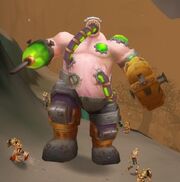 The Naxxramas kind of flesh giant.

Flesh giants[4] are a horrific combination of flesh and machine. Equipped with syringes, tubes, and other technology, they appeared for the first time in the halls of Naxxramas. Grobbulus was the prototype flesh giant, the first successful one of its kind, created to build a formidable army capable of quickly spreading the undead plague that coursed through their bodies.[5]