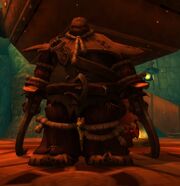 Foe Reaper 5000 is an elite harvest golem and the third boss of Deadmines. It is an upgraded model of the Foe Reaper 4000 golem that can be found roaming Westfall.

Defias engineers have spent many long days perfecting a new harvester model based on the Foe Reaper 4000 unit. Once it is completed, the brotherhood believes this mechanized terror will be able to slice through Stormwind's armored soldiers like a scythe though wheat.

During the Legion Invasions, it seems the Burning Legion reconstructed it.

Foe Reaper 5000 will occasionally cast Overdrive. This works a bit like Lord Marrowgar's Bone Storm: It runs to a random position while dealing AoE damage. It will also cast Harvest, which works somewhat similarly to Ick's Pursuit. It will target a random unit (who may or may not be the tank), wind up a five-second cast, and start running to that player's location when the cast is complete. The Foe Reaper will do some damage to units between its location and the marked spot on the ground. Any players at the marked location when the Foe Reaper gets there will take large amounts of damage, so run away! Melee DPS should stay behind the boss to avoid Reaper Strike. At roughly 40% health, the Foe Reaper will enrage, gaining Safety Restrictions Off-Line, which increases its damage dealt by 100%

The boss should be tanked to the near top of the ramp, so that casters can DPS him from a range. Before you start this fight, one of the DPS should control the Prototype Reaper, which is at the top of the room. The one inside the reaper then must stay at the bottom of the ramp during the boss fight and stay aggroing the Molten Slags that appear. The best rotation to do this is Reaper Strike, Reaper Strike, Reaper Charge, that way the mobs are always stunned and you have a good amount of energy. If no one goes in the reaper, the adds will climb to the top of the ramp and start dealing massive AoE damage to the party and it will be hard not to wipe. If you want, you can keep the reaper at mid-way up the ramp so that he can tank the adds while occasionally dealing some damage to the boss. It is not necessary to kill the adds before the boss dies.