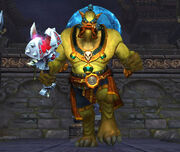 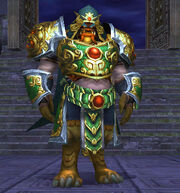 Kill the Master of the Forge and Collect a Codex Fragment from Fleshcrafter Hoku in the Isle of Thunder.

The forge lies ahead of you, and with it the heart of the Mogu's weaponsmithing ability.

And beyond that, the Mogu gatekeeper, who holds the key to unlocking the gate to the next part of the city.

It's time to move out!

Good work. What you did today brings us one step closer to our ultimate goal.

Itoka is immediately up the hill to the northeast from where Metal Lord Mono-Han was. A level-90 mogu with 4 million health, Itoka has some very annoying abilities. See his article for tactics on defeating him.

Immediately southeast of Itoka is Fleshcrafter Hoku, a level 90 mogu with 4.7 million health. Kill him for the

[Mogu Codex Fragment], then head to the Bloodied Crossing to find Scout Captain Daelin near the gate to the Stormsea Landing.

If adventurers have gained access to the Stormsea Landing, Taoshi will offer followup quests.