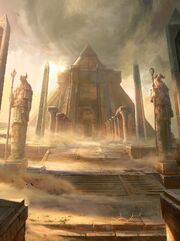 Uldum, the titan-forged stronghold housing the Forge of Origination.

The Forge of Origination is a powerful titan-forged device that was crafted by Archaedas and Mimiron[1] and installed in the jungles of Uldum by Highkeeper Ra and his followers during the ordering of Azeroth. The Forge of Origination would serve a dual purpose: it would regulate the rhythms of the earth and fortify the world-soul's form, but if the planet became corrupted, the Forge would eradicate all life in the world, allowing it to start anew. Its twin, the Forge of Wills, was constructed in Ulduar with a different but complementary purpose. After installing the forge, Ra assigned some of his tol'vir and anubisath servants to watch over it, while he and the rest of his followers continued west to establish Ahn'Qiraj.[2]

Within the Halls of Origination, four titanic watchers manage the Forge's systems. Rajh oversees the energies that have both sparked life and snuffed it out in an untold number of titan-forged, holding the power to unleash the fury of a thousand suns upon Azeroth.[3] Setesh holds sway over the powers of destruction, deemed necessary because of the Forge's purpose of wiping out life.[4] Ammunae regulates the natural energies coursing through the facility to ensure that life will exist on a reforged Azeroth.[5] Isiset regulates the arcane energies contained within, and produced by, the Halls of Origination.[6]

Many years later, the mogu warlord Lei Shen defeated and claimed the power of Ra. Having learned from Ra of the Pantheon's demise, Lei Shen, calling himself the "Thunder King", took it upon himself to continue the work of the titans. Thus, he announced his intent to claim the Forge of Origination as part of his empire. As the Thunder King and his Zandalari allies marched towards Uldum, the region's tol'vir guardians knew that they could not stand against him in battle. Instead, after having configured the weapon to only affect the surrounding region, they activated the Forge of Origination. All life on the surface of Uldum died instantly, and the lush jungle turned into a barren desert.[7]

Thousands of years later, the Forge of Origination was almost activated by Algalon the Observer, but he was convinced to stop. A short time after that, the Forge was disabled by Brann Bronzebeard and a band of adventurers in order to stop it from being used by Deathwing's servants.[8] In the process they slew Rajh, Isiset, Ammunae, and Setesh.

Shortly after the Fourth War, the Amathet tol'vir, seeing themselves as the only rightful caretakers of the titans, sought to take control of the Forge of Origination for themselves so they could activate Reply-Code Omega and reoriginate the entire planet in order to free Azeroth of the Old Gods.[9] At the same time, the forces of N'Zoth attempted to corrupt the Forge and change its reorigination device to instead overwrite reality with Ny'alotha, bringing back the Black Empire.[10] The forces standing against N'Zoth, led by Magni Bronzebeard and Wrathion, used the Forge of Origination - powered by the Engine of Nalak'sha, another titan facility in Pandaria[11] - to destroy N'Zoth for good by concentrating the reorigination device on him instead of across the whole world.