Forge of the Guardian 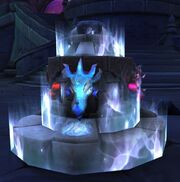 The Forge of the Guardian.

The Forge of the Guardian is the artifact forge for mages of the Tirisgarde. An artifact of incredible power, it was used for centuries by the Council of Tirisfal to transfer the arcane power of many mages into the body of one, thus creating a Guardian of Tirisfal. It was first devised by Alodi, the first Guardian,[1] whose spirit is forever bound to the forge, allowing him to interact with the people of the present centuries after his death.[2] The Forge of the Guardian also serves as a font of arcane energy which can be used to manipulate and empower the artifacts of the world.[3]

The last time the forge was used was during the time of Aegwynn, the second-to-last Guardian of Tirisfal, who refused to return her powers to the Council, thus preventing the appointment of a new Guardian.[1] When the Burning Legion learned of the forge's existence, the Council locked the artifact away behind the arcane barriers of the Violet Hold, which was not only the most secure location in Dalaran, but also a place where few would think to look. Ever since, the forge's location has been known only to the Council.[1][4]

During the Burning Legion's third invasion of Azeroth, the dreadlord Kathra'natir finally broke free from the body of his host, Meryl Felstorm, and infiltrated the Violet Hold in an attempt to claim the forge. He was confronted by Meryl and a mage adventurer, the former of which waylaid the dreadlord long enough for the adventurer to use the forge and become imbued with Alodi's "mark of the Guardian", allowing them to defeat Kathra'natir and force him back to the Twisting Nether to recuperate before giving the power back to Alodi. Alodi, Meryl and the mage champion then worked together to transport the forge to a safer location — the Hall of the Guardian — believing it to be necessary if they were to defeat the Burning Legion.[4] After retrieving a powerful artifact weapon to wield in battle against the Legion, the adventurer was instructed by Meryl on how to tap into the forge's power to further enhance their new weapon.[3]