Return Foror's Compendium of Dragon Slaying to the Athenaeum. 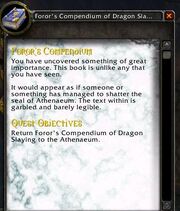 An uncommon background for a quest.

You have uncovered something of great importance. This book is unlike any that you have seen.

It would appear as if someone or something has managed to shatter the seal of Athenaeum. The text within is garbled and barely legible.

Ah, one of our greatest compilations. This one has been missing for ages.

You could have gotten quite a lot of gold for this book on the black market, <name>. Especially since the protective seal has been broken, leaving the secrets of dragon slaying viewable to any with the requisite intellect to consume the knowledge held within the sacred pages.

Perhaps a grand reward is in order... Well, a reward that will require enormous effort to obtain.

Upon turning in the quest, Loremaster Lydros offers the following dialog:

<Lydros reaches into his robe and presents you with a dull, flat elven blade.>

In ages past, well before even the War of the Ancients, there existed this blade.

The blade itself had to be crafted in ceremony with the children of the Aspects. A rare occurrence indeed... For not only would a dragon have to willingly heat and mold the enchanted metal with their breath, they would also need to contain the fury of their own enchantment by using their blood as temper.

Over the course of 8,000 years, only a handful of these blades were created - each blade unique in both power and appearance. The blades of Quel'Serrar would take on the characteristics of their creator.

Rumors exist of a single legendary blade of Quel'Serrar crafted for an unknown entity by the combined might of the five Aspects. Before the abominations of Nefarian and Deathwing were thrust into our world, such meetings of the Aspect were represented by the term 'Prismatic.' I could only assume that the Prismatic Blade of Quel'Serrar was a most glorious creation.

What I offer to you now is one such blade, unfired, unheated, untreated - the most raw and basic form.

Now you merely need to find a dragon that will willingly enchant the blade.

If you had an eternity to live, this might be a possibility; but since you are mortal and could very likely cease to exist at any moment, might I recommend trying to persuade one of the lesser dragons to do your bidding.

Have you heard of the brood mother of the Black Flight? I believe she is called Onyxia...

You are then given

[A Dull and Flat Elven Blade], which starts the quest