From Wowpedia
Jump to: navigation, search
Forums: Village pump → WoWWiki t-shirts
(This topic is archived. Please do not edit this page!) 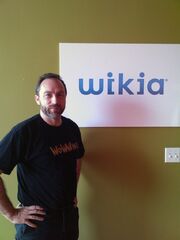 WoW, I really love the WoWWiki T-shirt that Gourra designed. Simple, but very nice. Maybe we could have Wikia make one with a small shirt-pocket location Wikia logo and a big WoWWiki logo on the back? Also, has anyone been in contact with User:Mikk recently? It would be nice to get a larger version of the Image:WoWWiki icon stamp.png to make a T-shirt with. --

And here's the t-shirt being modelled :) Unfortunately, I think the stamp logo is the largest we'll ever get - I think it may have been a SilverSide production. The wide logo, however, should be possible. I like the layout Sky mentions. Kirkburn  talk  contr 22:23, 19 March 2009 (UTC)

I like Sky's idea too. I would still like to see a WoWWiki/Wikia combo shirt, though. I may also try to make an SVG version of the stamp logo. --

I wonder if someone could splash the Image:Wiki.png really big like they do for the Maintankadin shirts. A witty quote would be fun too (at least if you want me to buy one!). I'm really looking forwarding to working out in the gym with my "righteous fury turns me on" tee. Woo hoo! -Howbizr (talk) 22:48, 16 April 2009 (UTC)