Forward Commander Onslaught is a quest giver located at Forsaken Forward Command during the phasing of that area as part of the Silverpine Forest storyline.

Onslaught initially has the player retrieve the

[Forsaken Communication Device] (F.C.D.), and thereafter communicates via auto-quest, which is achieved through a buff rather than a physical item in the player's inventory. He instructs the player as they conduct various covert operations against the forces of Gilneas. However, the situation worsens as the story progresses, and it is eventually discovered that the forces of the 7th Legion have amassed in preparation for an assault on the Forsaken camp. In Onslaught's final transmission, worgen can be heard in the background and he implores the player to locate Deathstalker Commander Belmont in Emberstone Village.

Following this, Forsaken Forward Command is lost to the Gilneas Liberation Front and Onslaught's corpse can be seen on the ground, surrounded by worgen.

Forsaken until the end. 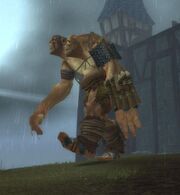 Korok the Colossus in the Northern Headlands of Gilneas drops an item,

[Korok's Second Head], which starts a quest to turn it in to Forward Commander Onslaught. Players are supposed to be able to turn it in to High Warlord Cromush if Onslaught has been killed by the time you do the quest, although it appears to be bugged. Although the quest is not necessary to complete the

[Silverpine Forest Quests] achievement, players wishing to complete it may want to do so before they reach the point in the phasing where Onslaught is dead if possible.