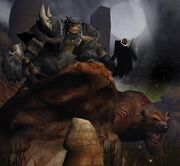 The Founding of Durotar is a bonus campaign in Warcraft III: The Frozen Throne.

After the Battle of Mount Hyjal, Thrall led his orcs to the south of Kalimdor. There he founded the nation of Durotar. The orcs face many problems of different kinds that need to be dealt with, whether caused by fearsome beasts or the human forces. During the campaign, you fill the role of Rexxar, a beastmaster and his bear companion Misha, as well as Rokhan, a shadow hunter from the Darkspear tribe and one of Thrall's finest scouts.

The bonus campaign differs from the main part of the game as it is viewed in perspective (i.e. buildings appear in correct proportion to units) and the traditional strategy style of the game is largely replaced with adventuring, questing, leveling and unraveling the story. The object of the campaign is to complete quests while developing your heroes' abilities, similar to the World of Warcraft style of play.

Heroes cannot die, as they are automatically resurrected by nearby Resurrection Stones.

* Act two and three were added in patch 1.13. You need to update in order to continue the story.