For the fox mob in Gilneas, see Fox (mob). 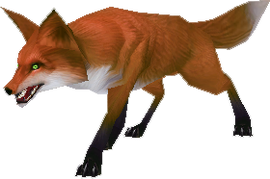 The fox is a small predator that is found in various areas around the Eastern Kingdoms, Pandaria, the Wandering Isle and the Broken Isles. They tend to be clever and cunning.[1]

Foxes are a good test of a hunter's skills, and their fluffy tails can be sold for fine profit to boot. Fox tails are as good to hang on a belt to ward off fleas as they are to line the gloves of a fancy noble.[2] During frigid nights in the Storm Peaks, the arctic fox kits use their fluffy tails as a blanket to stay warm.[3]

Alpine foxlings burrow deep into snowbanks to hide from predators,[4] and their kits occasionally sneaks bites of food from kills made by much larger animals.[5]

The fighting in Tol Barad has made it difficult to find the native fox kits, and numerous would-be owners have decimated the fox population there as a result.[6]

The sleek Llothien prowlers can prowl amongst newly-fallen leaves without making a sound, despite their large size.[7]

Vulpin are foxlike creatures native to Ardenweald in the Shadowlands.

Foxes are a family of ferocity pets and are tamable by Hunters starting at level 10. Their basic ability is

[Bite], and their special ability is a physical attack speed debuff called

[Tailspin], cause all enemies within 10 yards to have their melee and ranged attack speed reduced by 20% for 30 sec. This is useful both in PvP and PvE, although most tanks have similar debuffs. Additionally, they have a bonus ability called

[Play], which allows the hunter to make the fox perform a cute dance.

There are six different skins available for fox pets. The

Baradin Fox changes color upon each summon, while

Ashtail has a distinct silver-grey model.

Foxes can be found in the Emerald Dream. They exist in the proper balance.[9]