For the warrior ability, see

[Frenzy]. For the hunter talent, see 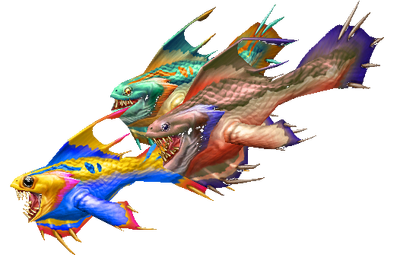 Frenzies are a large, piranha-like fish, found throughout both Azeroth. They usually appear as hostile aquatic beasts, though the Loch Frenzy can also be fished for. Frenzies also appear in Outland, but only in the presence of the naga, making it possible the naga took the creatures with them from Azeroth.

A variation known as deep sea frenzies are native to Nazjatar and have long been a staple food of the naga.[1] On the other hand, giant swarms of deep sea frenzies are apparently horrific things that the naga and ankoan alike fear, their numbers blotting out all light and devouring all unhidden flesh.[2]

Frenzies are voracious, toothy fish. They attack any prey with ravenous hunger. Frenzy can locate creatures underwater within a thirty-foot radius by sight. This ability, of course, only works when the frenzy is underwater. A frenzy can notice creatures by scent in a 180-foot radius and detect blood in the water at ranges of up to a mile, much like real-life sharks[3]