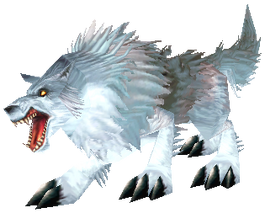 Frost wolves (or frostwolves) are a species of arctic wolves native to Draenor and especially the cold heights of Frostfire. Wild frostwolves usually hunt anything they can catch, with the fastest among them eating well,[1] but some of wolves also established a deeper bond with the so-called Frostwolf clan. These wolves hunt with their orcish partners, keeping them warm when their clothes are not enough, alerting them about strangers. And in return, the clan makes sure the wolves are well fed, that their injuries are healed, and their cubs need not fear predators scouring the mountains during the birthing times.[2] The clan's wolves eventually followed their partners in Azeroth following their exile to Alterac Valley.[3]

A first-fang is the first of many shed by an adolescent frost wolf pup when their adult teeth begin growing. The Frostwolf Orcs often keep the first-fang of their animal companion as good luck charms.

The creature looks like a wolf of tremendous proportions, with a whitish pelt and eyes that glow pale blue.