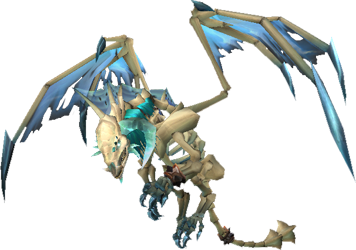 Some of Azeroth's mightiest dragons have been summoned across the veil between life and death to serve new masters with undying loyalty.[1]

Frost wyrms, also spelled as frostwyrms, are the skeletal remains of adult blue dragons killed by the Scourge. These reanimated vessels of destruction do not fear death; they dispense it.[2]

In ages past, venerable dragons nearing death flew to the land of Northrend to die. To this day there are entire dragon graveyards littered with massive petrified bones and skulls. When Ner'zhul, the Lich King, took control of Northrend, he used his powerful magics to raise the ancient dragon skeletons from the dead. These skeletal dragons radiate cold power and think of nothing other than serving their dark master.[7]

Frost wyrms have a cold-based breath weapon that can shatter entire buildings and enemies both on the ground and in the air. They are also quite fond of devouring their hapless enemies whole. Ner'zhul's vicious frost wyrms hold the frosts of Northrend within their skeletal hearts. By inhaling a great deal of air, frost wyrms can expel blasts of freezing cold so extreme, that they pull all the moisture from the air around a building and freezes it solid.[7] The boneyard is the home of the frost wyrms...frost wyrms have a crippling ability to cast their freezing breath onto enemy forces and buildings. In large numbers, frost wyrms present a truly dominating force.[8]

In life, they could not be tamed, but necromancy and esoteric binding rituals have now combined to bend these indomitable creatures to their riders' will.[9] Many believe that during their early lives, these wyrms were forced to fight their own kind for the amusement of others. Perhaps that is why they possess a particularly combative temperament.[10]

In the Alterac Mountains, there was at least one frost wyrm raised by the ghoul Ichor with the Orb of Ner'zhul.[11]

When Lich King Arthas awoke, one of the first acts he did was to raise the frost wyrm queen, Sindragosa, from her glacial graveyard. The blue dragons raised from Sindragosa's Fall are considered elite frost wyrms and are called Frostbrood.

Frost wyrms often receive a new name upon being raised into undeath. On occasion, however, they retain the names they had in life.

These creatures have the skeletal forms of great dragons, and wicked intelligence gleams in their eyes.[12] Now, these once-noble beasts serve Ner'zhul and seek to expand the Lich King's rapidly growing empire.[13] They have no memories of their previous lives nor of the world beyond death. They are intelligent beings, quite capable of strategy, tactics, and deception, but they have no understanding of their past dragon heritage.[13] They are withered creatures.[citation needed]