The Frostmane tribe (or clan)[1] are a tribe of ice trolls that inhabit Dun Morogh and constantly fight a guerrilla war against the dwarves. In recent times, they have welcomed the trogg invasion of the dwarven lands, and are content to let the two sides fight it out whilst they sit and wait for an opportunistic moment to take back their lands. They can be found throughout Dun Morogh, notably in Shimmer Ridge, Frostmane Retreat and Frostmane Hovel. Their former capital, Frostmane Hold, was taken over by troggs.

The Frostmane tribe was once part of the nation of Zul'Drak. After the Sundering, the Frostmane and Winterax tribes left the Drakkari tribe in Northrend and settled in the Eastern Kingdoms. Due to the ice trolls' unrelenting hostility toward outsiders, historians have yet to learn how these two tribes were separated from the Drakkari and came to live so far from the ancient site of Zul'Drak.[2]

The frigid lands of Dun Morogh where once ruled by the Frostmanes before the dwarves conquered it from them.[3]

At some point, several Frostmane trolls came too close to Ironforge and attacked a group of dwarves which included queen Eimear who was killed during the attack. Mountaineers fought the trolls back but couldn't save the queen.[4]

The Frostmane trolls once ruled over the frigid lands of Dun Morogh, only to have their empire fall to dwarven armies. The ice trolls were driven to the hills in retreat, a shameful blow to their warlike nature. With the Ironforge armies focused on quelling the trogg invasion or fighting Alliance wars, the Frostmane trolls have seen the opportunity to reclaim their ancestral home[5] of Dun Morogh and restore their long-lost kingdom.[6] Despite being smaller than their Drakkari brethern, much like the Winterax trolls are, the Frostmane trolls have been launching increasingly frequent and aggressive attacks against the dwarves living in Dun Morogh,[2] using Constriction Totems to block paths for Dwarven mountaineers.[7] The dwarves currently consider the Frostmane tribe little more than a nuisance, and have not made a concerted effort to vanquish them.[2] The Senate of Ironforge has taken small note of the annoyance, and have sent Grelin Whitebeard and his brother Senir Whitebeard to take care of the problem.[8]

Since the Cataclysm they've been forced out of their homes by troggs and into conflict against the Ironforge dwarves.[9] With the death of their chieftain at the hands of the troggs, the Frostmane turned to Battok the Berserker, a well-respected warrior. Under his leadership they have retreated from Frostmane Hold, established a new settlement called Frostmane Retreat and started launching strikes against Kharanos.[10]

Sometime after the events at the Isle of Thunder, the Zandalari have turned their focus on rallying the Frostmane tribe of Dun Morogh against Ironforge, but their plans were thwarted by Moira Bronzebeard and Varian Wrynn.[11]

During the Legion Invasions, several members of the tribe at Frostmane Retreat were forced to join the Burning Legion, but they seemed to make poor converts. The demons Vel'dromas and Tyl'vara seemed particularly involved in the process.

Frostmane Speakers can be found in Zuldazar on Zandalar. They, like many other tribes, are unhappy with the idea of the Zandalari joining the Horde.

Despite this, the Frostmane make up a large portion of the procession to mourn Rastakhan after his death. They are neutral to the Horde, only fighting back if attacked first. 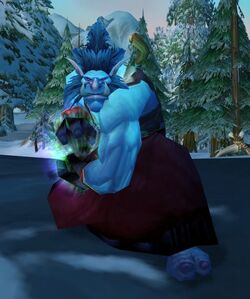 The Frostmane tribe may worship many of the Drakkari loa primarily, with their connection to snow and ice. Though trolls can worship loa universally.