This article is about is the Warlords of Draenor faction. For the original timeline clan information, see Frostwolf clan. 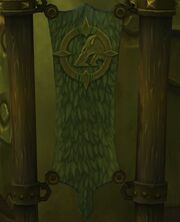 “Like the great wolves that roam here, we survive in this land according to its rules.”

The Frostwolf Orcs, or Frostwolf clan, are renowned for their prowess as one-on-one combatants. Led by Chieftain Durotan, they are a strong, close-knit clan whose bond with wolves only adds to their strength—though their numbers remain smaller than most clans. Though the clan spends much of their time in Frostfire Ridge, they migrate to Nagrand with the seasons.[2]

In the past, the clan battled against the Laughing Skull clan.[3]

As the Iron Horde was being formed, invitations were sent to every clan, the Frostwolves included. However Chieftain Garad rejected the offer and, in turn, was killed by the Iron Wolf, and his Thunderlords. Henceforth treated as enemies of the Iron Horde, members of the Frostwolves would be captured and sent to work as slaves for the Iron Horde war machine as it prepared for its invasion of Azeroth. Later some of these prisoners would be used to power the portal along with the draenei.

Though the Ironmarch scored early success they were ultimately defeated and the defenders of Azeroth were quick to turn the tables by invading Draenor. After beating back Iron Horde forces, the Horde and Alliance forces split off with the Horde becoming allies of the Frostwolf Orcs. The two would work together in beating back the Bladespire ogres and claim Bladespire Citadel as their own.[4] However while the Horde was focused on the ogres, the Thunderlords took the opportunity to strike Wor'gol. After defending the town the Frostwolves decided to take the fight to the Thunderlords.

During the Horde counterattack, the Thunderlords would face a series of defeats that would ultimately see the death of its chieftain.[5] However, instead of being able to rejoice in their victory, scouts reported that a massive Iron Horde army was making its way through the Thunder Pass.[6] In order to prevent the Iron Horde from pushing through, the Frostwolves and their allies faced them as they came out of the pass. The Battle of Thunder Pass would be costly for the Iron Horde as the united Frostwolves and their allies protected the pass. However, with the Frostwolves outnumbered, Drek'Thar sought to speak with the earth in order to collapse the canyon itself. This was ultimately successful and the Iron Horde invasion was destroyed, though the battle was not without its casualties, which included Ga'nar who sacrificed his life to buy Drek'Thar the time he needed.[7]

With the battle finished, the Frostwolves mourned the fallen and decided to take the fight to the Iron Horde. To that end, they ensured no hostile presence remained within Frostfire Ridge[8] and sought allies to aid their war against Iron Horde forces.

They later ventured into Talador where Durotan and Draka fight the Grom'kar Vanguard, led by Orgrim Doomhammer and the Burning Blade Clan. After their success in Talador the Frostwolves joined the Horde in the Siege of Grommashar, which saw the death of Garrosh Hellscream.[9]

Frostwolf forces later breached the Tanaan Gate and took to fighting the Iron Horde forces within the Iron Front.

While the exact order of events is unknown, by the time of the Fourth War Durotan was killed by the Lightbound and the Frostwolves joined with the Mag'har orc clans under the command of Warchief Grommash Hellscream.[10] In time, Geya'rah, Durotan and Draka's daughter, would eventually rise to the rank of Overlord and serve as the Warchief's second-in-command during the war between the Lightbound and the Mag'har. As the Mag'har and Lightbound clashed, events on Azeroth would see to a new war between the Horde and the Alliance. In the midst of this, Eitrigg sought to travel to the alternate Draenor and call upon the debt the Mag'har owed to the Horde for liberating them from Garrosh Hellscream's meddling and the Burning Legion's corruption.[11]

As the entire Lightbound army was marching towards the Mag'har, Grommash ordered for the Mag'har to follow Geya'rah and fallback to Azeroth. Thus, when Warchief Hellscream and Lantresor of the Blade charged at the Lightbound, Eitrigg activated the shard of the

[Vision of Time] in his possession in order to return to Azeroth with his new allies.[12] After their arrival on Azeroth, Overlord Geya'rah took her place as the leader of the Mag'har and pledged the loyalty of her people to Warchief Sylvanas Windrunner and the Horde.[13]

A Frostwolf orc and his frost wolf.