For the greater complex of which this dungeon is a part, see Icecrown Citadel. 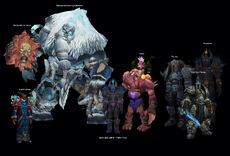 The Frozen Halls is a three-winged dungeon released in Patch 3.3.0. This dungeon was the last one released in the Wrath of the Lich King era.

The entry chamber to the Frozen Halls instances has been designated a sanctuary and can be found on the northwest side of the citadel on the upper parapet. A meeting stone can be found inside the halls near the three instance lines.

Every loot item which drops in both Normal and Heroic modes for those instances is of epic quality. The loot for Normal mode equals or surpasses 10-man Ulduar drops in some slots. The loot for Heroic mode equals or surpasses 10-man Onyxia's Lair and 10-man Trial of the Crusader normal mode drops in some slots. However, the instances' difficulty should not be underestimated. And just like Trial of the Champion, it is by no means a "get epics quick" scheme for under-geared players!

Icecrown Citadel: The Frozen Halls features 3 wings and 7 bosses where the players accompany Jaina Proudmoore (for Alliance players) or Sylvanas Windrunner (for Horde players). Only the Forge of Souls is available at the start; players must complete each wing in sequence to unlock access to the others.

The Forge of Souls

The first wing in the instance will have the players destroy soul grinders under watch of Bronjahm and the Devourer of Souls, wicked machines that serve some dark purpose of the Lich King. When this is complete the players can advance into the next wing.

The second wing of the instance involves entering a saronite mining pit and freeing captured champions of the Alliance and the Horde, put to slave labor by the Scourge under watch of Forgemaster Garfrost, Krick and Ick, and Scourgelord Tyrannus.

The last wing of the instance will have players and their guides attacking the private chambers of the Lich King along with his two Scourge commanders, Falric and Marwyn.

The three wings of the dungeon have a cohesive storyline played out in quest chains for both factions:

[80D] Inside the Frozen Citadel

World of Warcraft Community Site Under Development (US): Icecrown