Fungal giants (a.k.a. spore giants and bog giants) stand as a prime example of Zangarmarsh's remarkable fauna. Though relatively non-aggressive, these lumbering behemoths are savagely efficient at dispatching their adversaries when provoked. They feed on other native swamp creatures, as well as any Lost Ones unlucky enough to stray too close to the giants' beloved hideaways.[1]

Once, the area now known as the Dead Mire served as the spawning grounds for the fungal giants. With the waters receding, it seems the changes are preventing the giants from sporing. If the trend continues, the giants may disappear entirely.[2]

Recently, the giants have come into conflict with the Sporeggar. Driven by starvation due to the continuous sapping of the marsh's resources by the naga, they have began to roam the Spawning Glen, preying on sporeling young. Members of the Cenarion Expedition are looking for a peaceful solution to allow the two species to cohabitate in the marsh.

The bog lord variation is larger and hardier than regular bog giants.[3]

A number of fungal giants also appear in Deepholm. They appear to have been colossi who were struck by a curse similar to the Curse of Flesh, likely caused by the stone troggs. The other giants share no love for their fungal brethren.[4]

Fungal giants are not actually made of fungus. The fungal growth over their bodies is another organism living in symbiosis with the giant.[5] Some, like the Gloomshade Fungi, are at least considered fungi. Not that the Gloomshade Fungi are attacked by the passive Fungal Giants.

They have three hearts that look like artichokes[6] and their brains, "complex fungal [structures]",[7] are described as "soft, convoluted [masses] of fungi" that exert centralized control over their bodies.[8]

It's unknown exactly how long they can live; however, Hungarfen has been alive for millennia tending to a very special plant, known as the Underspore.[9] 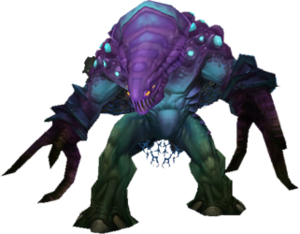