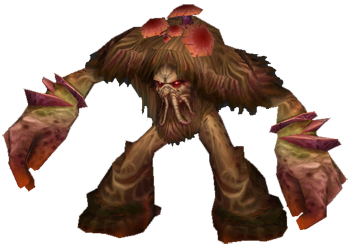 Loatheb is an undead fungal monster. He was the hideous result of fusing the living plague of the Plaguelands with the bog beasts of Azeroth.[1] He can be found at the end of the Plague Quarter in Naxxramas. The mirebeasts of the Wetlands are symptoms of the earth's disturbance, a foulness of rot given form. They take the shape of bog beasts, infested within with decaying spores, forcing out flourished life in the swamp taking all and leaving only rot.[2]