G'Hanir, the Mother Tree is the artifact used by restoration druids in World of Warcraft: Legion.

This is a single branch taken from G'Hanir, the first tree, which was gifted to mortal druids by the demigod Aviana long ago. Its connection to the mystical Emerald Dream serves as a healing and stabilizing influence on the world of Azeroth. In recent times, druids have used this staff to hold back the corruption and madness of the Emerald Nightmare. As a result, satyrs within the Nightmare are desperate to see G'Hanir destroyed.[1]

The shock of Aviana's death in the War of the Ancients reverberated through the Emerald Dream, and all the leaves of G'Hanir fell from their branches. Many mourned it, and some succumbed to the temptation of serving dark forces in Aviana's absence. But although she had died, her spirit lingered. As the night elves struggled to rebuild their society in the wake of the Great Sundering, the green dragonflight discovered a gift: A single branch from the Mother Tree, with a single acorn hanging from its leaves, had been left in their care. Alexstrasza of the red dragonflight used the acorn to grow Nordrassil, the World Tree.[2]

Malfurion Stormrage sensed that it had been Aviana's spirit that had given the branch to them, and he believed it was best to keep it hidden. Many of Aviana's children had been lost to chaos, and they might be driven to claim the remnant of Aviana's legacy for their new masters. Quietly, Malfurion moved the branch to a safe location within the Emerald Dream. Few knew of its location, but its influence was felt far and wide. For many millennia, the branch served as a stabilizing force for the Emerald Dream, and the land near it was said to be a place of great healing and peace.[2] 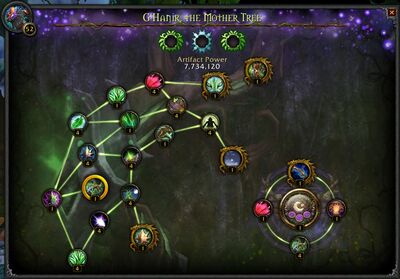