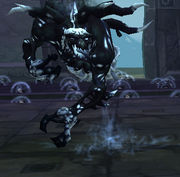 Ga'trul was a Horde warlock who took the reins as commander of the fleet in the southern Jade Forest at Garrosh'ar Point, with Twinspire Keep as his main base. The orc grew increasingly paranoid as his time on Pandaria continued, and seemed to have a great disdain for the Forsaken.[1]

When Krug was killed by Alliance forces, Ga'trul took command. His subordinates were Dalgan, and later Bellandra Felstorm, when she arrived along with a battalion of Forsaken Deathguards. He had his men summon imps and even an observer, Xhu'daggab, out of paranoia. When the pandaren refused to trade with him, he grew violent, going so far as to kidnap their children to force them into a trade agreement. These events were all transcribed in his log of the events on Pandaria.

When the Alliance arrived, they confronted him at his base at Garrosh'ar Point, but he escaped after threatening them.[2] He returned to Twinspire Keep, where he continued to lead his forces, until he was challenged in the keep's interior in hectic battle involving the demonic portals he had set up. As defeat loomed over him, he fell into a deep rage, transforming into a sha beast, before finally meeting his end.[3]

He appears in the following quests: