“What fun would it be if there were no mysteries between us?”

Galell was the one-time apprentice of Lady Liadrin, to whom he was very close. Surviving the Third War, he eventually joined the Blood Knight order under Liadrin's leadership. He struggled greatly with his addiction to magic, recklessly overindulging in copious amounts of arcane energy. 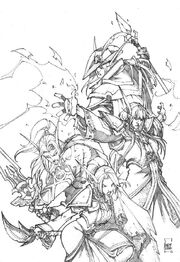 At some point, the young Galell accompanied his superior, Liadrin, and Dar'Khan Drathir in their mission to investigate a malfunctioning runestone. The group was ambushed and subdued by a raid of Amani trolls, who beat their captives (soon to include the ranger Lor'themar Theron) and brought them into a chamber for torture. Galell escaped his bindings and fought off several trolls in the confusion, landing his very first kill. He was safely warped from the danger by Dar'Khan Drathir. The experience was the beginning of a friendship between Galell and Lor'themar.

Galell had grown into a fine priest over the years, though he, like most of the elves, was unprepared for what was about to befall on Quel'Thalas.

He accompanied a ship of evacuated children during the Scourge invasion, ordered to sail away and take shelter with the Wildhammer dwarves in the Hinterlands. Galell attempted to soothe the increasingly worried passengers, among them a young boy named An'dorvel. The ship was attacked by the undead, and torn apart by gargoyles. Galell was assaulted by one such creature, who hurled him from the ship and across the water. Though Galell defeated his opponent, he could only watch helplessly as the ships sank, the screaming children still trapped beneath deck. He passed out from the horror and was thought dead by his comrades.

Galell awoke to a very changed situation. He found himself in the ruins of Silvermoon, barely clinging to life. Almost ninety percent of the high elves had lost their lives in the massacre, among them the king. The Sunwell had been defiled and the invaders had wrought a trail of destruction through the land. Lor'themar had taken over high elven leadership in the absence of the prince, Kael'thas Sunstrider, who rushed back home from Dalaran to survey the carnage. Shaken to the core by the events that had transpired, Galell nonetheless mustered the strength to assist the prince in destroying the tainted well. He was also reunited with Liadrin and Lor'themar, the three enjoying a brief moment's peace. Though it took effort to reestablish his connection with the Light, he succeeded, and was a boon to the prince's team of volunteers. He was present to witness Kael's christening of the "blood elves".

Galell's life had not been easy in the years following the prince's departure. He had only infrequent contact with his old friends, and his innate addiction to the arcane manifested itself very strongly in the priest. He was a frequent patron of Orovinn, a shady elf who dealt in mana crystals. Galell was behind on his payments and threatened with violence should this remain the case. His relationship with the Light had also deteriorated; while Liadrin and many of the other priests had denounced it, Galell had simply found himself struggling to invoke it -- his brutal memories of the Scourge onslaught haunted him.

Galell found a chance for a better life in the Blood Knight order, founded by Liadrin herself. Galell was inducted into it by his old mentor, who believed that helping Galell find the Light again -- even if he had to force it to recognize him -- would do him some good.

The opposite proved to be the case. Dealing with M'uru was difficult for many knights, and the experience hit Galell hard. His continued abuse of mana crystals, coupled with the creature's voice (which reminded him unduly of breaking glass and the screaming children), had Galell sink further into his addiction to magic. Galell used his payments in the order to acquire copious amounts of mana crystals from Orovinn, and recklessly overused them. He murdered his dealer and strung him up at the Shepherd's Gate, fleeing the scene with his coveted crystals.

Galell fled to the old troll sacrificial chamber, which had become abandoned and worn down over the years; there, he used up his final crystals. His abuse of mana had warped him into a Wretched-like appearance, though still he craved more. He was confronted by Liadrin, who attempted to reason with the increasingly unstable Galell, though the priest lunged at his former mentor and attempted to kill her. Crazed and traumatized, Galell ranted and raved of his past experiences, until Liadrin finally dealt him a killer blow.

Galell's death weighed heavily on Liadrin. It marked the first time she had questioned whether the Blood Knights' path was correct, and mourned for him deeply with Lor'themar.

Galell was a kind and empathetic elf. He was enamored with Liadrin, though she always viewed him as more of a younger brother. He believed strongly in the bond of friendship he shared with Liadrin and Lor'themar, though unlike the other two, he never truly managed to face his demons: he was forever haunted by his experiences in the Third War, and succumbed to his addiction to magic without moderation. Part of why Liadrin founded the Blood Knights was to find balance in her lifestyle, something her apprentice would sadly never achieve. He had been traumatized during the Third War by imagining the screaming of the children aboard the three sinking ships meant to carry them to safety, and hearing Mu'ru, whose voice sometimes sounded like the screams of hundreds of children, and an apparently traumatic experience fighting off several trolls, slaughtering them, leaving pieces strewn across the ground, was what eventually finally unhinged him fully to the point he murdered Orovinn in cold blood and strung him up in front of the Shepherds Gate, only to have trouble remembering the event later. Before he was killed, he kept muttering, laughing hysterically, "knock, knock knock, knocking at my door... Orovinn knocks no more...".[2]