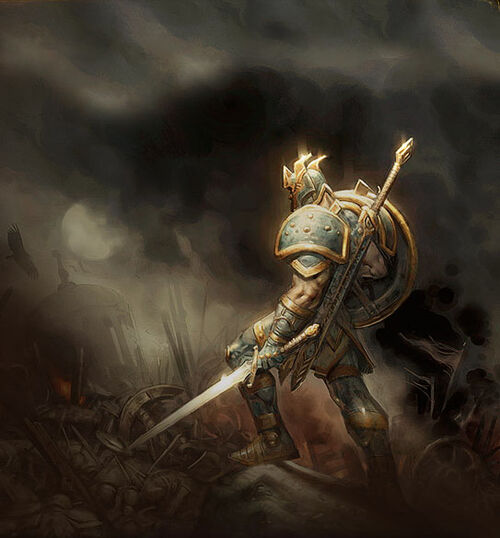 The BGs, where half the battle is stayin’ alive, are points of strategic importance to both the Alliance and the Horde. In the trenches, forests, and plains of these instanced areas, players fight members of the opposite faction while completing a wide range of objectives. Don’t get carried away in the heat of battle, focus on the mission and stick to your battle brothers and sisters. Keep what you capture, don’t leave anything undefended and never, EVER, fight on the roads (to hell). Remember, there are more honor points in victory; all else is dust, easily swept away.

Keep the resources flowing into the stores of your faction by capturing and holding nodes. Stall the enemy, disrupt their operations and you may soon be cruisin’ the road to victory.

Arathi Basin is a mountain-rimmed valley with some of the most arable acres in the Eastern Kingdoms. The basin has long been a prime point of societal development, offering lumber, gold and prime grazing land for livestock. It was only a matter of time before this fertile place was viewed through the sights of bows and guns.

The Basin’s earliest days (and original owners) aren’t even footnotes in history – the land frenzy driving Alliance and Horde now dominates the landscape. The League of Arathor, the remnants of the once-proud kingdom of Stromgarde (now occupied by ogres and the criminals of the Syndicate), would claim the basin to profit their allies in Stormwind (and, through them, the whole of the Alliance). Set against them are the forsaken Defilers, free-willed undead who strive to savage the human kingdom of Lordaeron and secure their home in the Undercity – and they demand Arathi’s resources to do it.

Eye of the Storm

“Eye of the Storm” would be a florid name for most regions – but for the floating isle suspended high above Netherstorm, it’s just right. Coruscating mana storms suffuse the island’s towers with energy, even as they wear away the barrier between Outland and the Twisting Nether, realm of the demonic Burning Legion.

These nexuses of power (and the Eye’s proximity to the Naaru fortress of Tempest Keep) make an otherwise barren rock irresistible to the Light-worshipping draenei refugees of the Exodar and the driven blood elves of Silvermoon City.

Isolationism has long shaped the nation of Gilneas, affecting its people inside and out. The enormous Greymane Wall once protected them from a plague of undeath; now that the wall has fallen, the citizens who huddled behind it are forced to confront that particular fear. The rotting Forsaken seethe to spread their contagion throughout the whole region of Lordaeron, claiming it as their own - and they see opportunity in Gilneas' rubble.

Fortunately for the people of Gilneas, their own particular curse transformed them into bestial wolf-human hybrids.

Now, the Horde will support their undead allies' attempt to seize resources from a damaged nation, while the Alliance comes to the aid of a tainted people seeking new lives. Regardless of the victor, monsters will rule over the ruins.

The verdant Valley of the Four Winds has long enriched the continent of Pandaria with bountiful fruit, fields of grain, grandiose vegetables, and…gold?

Deepwind Gorge dips below even the Valley’s normal depth, and it’s here that the pandaren have turned the earth, exposing rich veins of gold. Ever since they freed themselves from the tyrannical mogu, the inhabitants of the Valley have made careful, cautious use of these riches, taking only what they need and paying attention to the limits of their land.

But the Alliance and Horde have their own plans for the gleaming metals of the Gorge. Amidst the quarry, filled with dislodged rock and connected by makeshift wooden bridges, both factions will rush for a bonanza of riches that only one can walk away with.

Diamonds! Stranglethorn Vale’s Silvershard mines are full of the gleaming gems, and, while they’re pretty to look at, they’re far more important for what they can buy: new blades, ballistae and battle-gear for the soldiers of the Alliance and Horde. Neither faction wants its opposition digging up diamonds – not when the other option is to spill their enemies’ blood on the rocks and make off with the loot in Venture co. mine carts!

During the lost days of ancient Pandaria, the ruling mogu built temples not unlike themselves – immense in size, vast in scope, and steeped in forces as old as the ground beneath their feet. Stony statues of the mogu still glare down from their long-vacant temples, and echoes of their supremacy persist to the present day. Inside the autumnal Temple of Kotmogu, a vicious melee has erupted over artifacts the mogu left behind: treasures older than the bloodlines of human kings and the clans of orcs, orbs of power that have bathed in the energies of Pandaria for ages. Will they bring the might of the mogu to the Horde or Alliance?

Sneak into the enemy’s fort, take their symbol of pride (flag) and return triumphantly (means: alive) to your own flag. Do not allow the enemy to take your flag or you will be unable to capture theirs.

The gleaming purple-and-emerald forests of Ashenvale are more than just pleasant woodland. To the Warsong orcs who name themselves Outriders, they’re a prize cache of building planks; to the night-elven Silverwing Sentinels, they’re home. Where the turned soil and tree stumps surrounding Horde lumber mills start to encroach on Ashenvale’s timberlands, these two factions clash.

Each group recruits heroes from far and wide – the Horde to batter back the defenders and clear the forests, and the Alliance to shatter the aggressors and stop the disappearance of their precious land. Capturing flags might seem like an unorthodox method of settling this dispute, but it’s symbolic (and hardly without bloodshed). Whoever holds their defeated foes’ banner will show all who look upon the forest that their claim is the strongest – and dictate the future of one of the most important, ancestral lands of the Kaldorei.

The Twin Peaks are a strategic chokepoint crucial to Horde and Alliance assaults on the Twilight’s Hammer cult and the forces of Deathwing. These craggy mountains are so vital to the war effort that the Dragonmaw clan of orcs and the Wildhammer dwarves remain locked in seemingly endless battle to this day, each hoping to claim definitive ownership of the peaks.

CRUSH YOUR ENEMIEEEES, NYAHHHHHHHHHHHH! What? Oh… *ahem*. Ride into the fields of battle and clash with the enemy force. Burn down their towers, obliterate their defenses and eliminate, or secure, high priority targets.

Long ago, the warlock Gul'dan exiled a clan of orcs called the Frostwolves to a valley hidden deep in the heart of the Alterac Mountains. The Frostwolf Clan eked out a living until Thrall triumphantly united many of Azeroth’s orcs. The Frostwolves, however, chose to remain in the valley rather than joining Thrall in Orgrimmar – and their relative peace has since been challenged by the arrival of the dwarven Stormpike Expedition. The Stormpike Expedition’s desire to mine and plumb the underexplored caves for relics has invited conflict with the Frostwolf Clan, but opinions are divided on who struck first. Were the dwarves who arrived in the valley peaceful explorers who were massacred by the orcs, or did they plan to poach and conquer?

Strand of the Ancients

The world-shaping titans have left their mark on frozen Northrend, though often their presence is embedded in the ground, as in mysterious Ulduar. Yet, on a narrow island chain, a sliver of titan handiwork is out in the 'open'.

As Horde and Alliance vanguards began to course over the continent of Northrend, their mystics awoke to dizzying visions of an isle, and a gleaming power behind heights of stone. The Strand’s long-abandoned citadel towers and great gates loom mightily...but there’s crumbling rock and rust among those fortifications. They can be brought down.

Disembark on the Strand with your war machines and fellow soldiers, smash the walls of yesteryear and claim a prize of eons’ past. Or seize the titans’ once-magnificent bulwark, man their guns, and blast your enemies back into the sea.

Just offshore of the immense Icecrown Glacier, crawling with frozen dead and coated in ice cracking under the wheels of invading siege engines, lies an oil-rich island. It’s strategically perfect – a quick trip by boat to the greatest point of conflict in Northrend.

The elite among Horde and Alliance armies – the Kor’kron Guard and the 7th Legion – have arrived on the isle in force, and put down roots. Smiths and machinists have begun their work, turning this nameless landmass’s natural resources into smoke and steel. Highly secure keeps, exited only through mage portals, allow the generals of each faction to issue commands to their armies without leaving the safety of their fortresses.

The engines of war are churning. All that remains is for two heavily armed forces to agree about the territory lines.

A vast body of cobalt water, frozen into diamond stillness by Northrend's chills. An alabaster-white keep, built to gaze over one of the most austere examples of Azeroth's natural beauty. And a promising mine, one whose plunder could power exploration of the entire cold continent.

It's no accident that Lake Wintergrasp is the seat of ceaseless battle. Every few hours on the lake brings another skirmish, the thunder of cannon fire and crunching tread of tons-weight vehicles re-powdering the snow. Every outbreak of violence is a chance for a peon or peasant to find riches in the mines, or for an adventurer to seek treasure in the unearthly vault below the keep.

Horde and Alliance fight for Wintergrasp's plunder, but not blindly. If they bolster the war machine that brings down Northrend's horrifying undead, they buy their soldiers the hope to return home.

The decaying remains of this island stronghold tell a story of blood and flames. Built by the first nation of men, the citadel of Tol Barad was once a strategic staging area for Alliance forces in the Second War. The Horde viewed Tol Barad as an obstacle in their path to the Eastern Kingdoms and mounted an assault on the island. Unprepared for such aggression, the Alliance were expelled from Tol Barad and the citadel was razed, a charred symbol of the Horde’s brutal victory. What remained of the blackened, derelict battlements was left to languish until the wizards of Kul Tiras claimed the isle for a new purpose. Towering walls were again stacked high from the war-scarred stones, but in their cleverness, the arcanists turned the citadel’s defenses inward, designing a mystical prison to hold the most powerful criminals.

Today, the struggle for control of the island and its grim penitentiary continues. Now that the Horde and the Alliance once again have a foothold in Tol Barad, whose blood shall be spilled into Baradin Bay?