This article is a copy of "Draenei", an official article from the 2010 BattleNet World of Warcraft Site. These articles overviewed the draenei race in World of Warcraft prior to Legion. The original articles are no longer available, but they can still be viewed through online archives (see below). 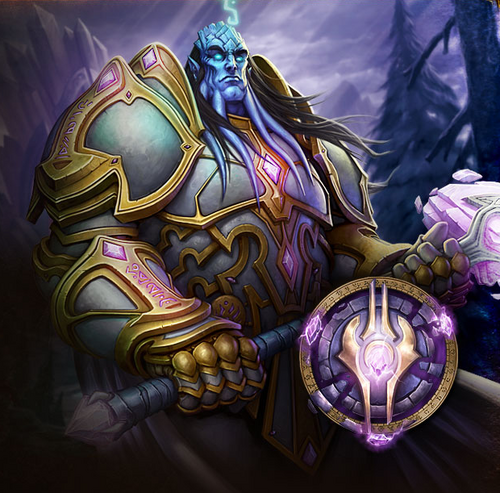 Long before the fallen titan, Sargeras, unleashed his demonic Legion on Azeroth, he turned his baleful gaze upon the world of Argus and its highly intelligent inhabitants, the eredar. Believing that this magically gifted race would be a crucial component in his dark quest to undo all of creation, Sargeras contacted the eredar’s three leaders – Kil’jaeden, Archimonde, and Velen – and offered them knowledge and power in exchange for their loyalty.

Only Velen abstained, for he had seen a vision. In it, his people were transformed into hideous demons, and they joined the ranks of Sargeras’ Burning Legion: an army of unspeakable evil that would grow vast and decimate life on countless worlds. With the aid of the naaru, benevolent energy beings who had resolved to combat the fallen titan’s nihilistic crusade, Velen gathered other like-minded eredar and narrowly escaped Argus. Forever after, these renegades would call themselves the draenei, or “exiled ones.”

Kil’jaeden, who had loved Velen like a brother, was infuriated by the draenei’s flight from Argus and their ungrateful refusal of Sargeras’ offer. In retaliation, Kil’jaeden led the Legion’s armies on a relentless pursuit of the draenei throughout the cosmos. Eventually, Velen and his beleaguered people eluded their hunters and found sanctuary on a remote world that they would name Draenor, or “Exiles’ Refuge.” Having been instructed by the naaru in the ways of the Light, the draenei developed an extraordinary society on their new home and came to know the shamanistic orc clans native to Draenor.

Yet the draenei’s peaceful existence did not last. Upon discovering the renegades’ home, Kil’jaeden corrupted the noble orcs into a single, bloodthirsty force of destruction: the Horde. Blinded by rage, the orcs wreaked havoc upon the draenei, slaughtering over eighty percent of the race and forcing Velen and other survivors into hiding. Many draenei also mutated into lesser forms known as the Krokul, or “Broken,” after being exposed to the fel energies wielded by orc warlocks. Decades after the Horde’s genocidal campaign, the shaman Ner’zhul opened magical portals throughout Draenor, and the resulting magical stress tore the dying world apart.

In the wake of the calamity, what remained of Draenor – known henceforth as Outland – devolved into a battleground among the Burning Legion and other factions vying for control of the ruined landscape. To escape the mounting chaos, Velen and a number of his followers commandeered the Exodar, a satellite structure of the stunning naaru dimensional fortress named Tempest Keep. Using this craft to search for new allies, the draenei left Outland and later crash-landed upon the world of Azeroth.

Inspired by heroic tales of the Alliance and its victories against the Legion, the draenei sought out and pledged their loyalty to this courageous faction. Not long afterward, Velen and his noble refugees played a key role in urging the Alliance to invade Outland and disrupt the Legion’s nefarious activities. Armed with their unshakable faith in the Light, the draenei ventured to their embattled former home as steadfast members of the Alliance and defeated their ancient demonic rivals.

The return to Outland offered many draenei a chance to reconnect with their brethren who had been left behind. While some of Velen’s race chose to rebuild their society in the shattered land, the majority of draenei remained on Azeroth, vowing to uphold their commitment to the Alliance. Recently, Velen was granted a dire vision concerning a war between the forces of light and darkness that would take place on Azeroth. Thus, the draenei and their sage leader are now bravely preparing to stand against the shadow that they believe is fast approaching.

Located off of the coast of northern Kalimdor, Azuremyst Isle is home to the draenei, refugees who fled Outland aboard the massive dimensional vessel named the Exodar. When the draenei crashed on Azeroth, powerful crystals from their vessel were scattered about Azuremyst Isle, mutating flora and fauna near the debris. Following the ill-fated landing, the draenei worked feverishly to find survivors and mend any damages inflicted on the isle due to their disastrous arrival. The draenei have since taken to the isle and established the remains of the Exodar as their base of power. Having suffered a long and arduous history of exile, the draenei are now resolved to give their lives in defense of Azuremyst Isle.

Once a satellite structure of the mighty Tempest Keep, the dimensional craft known as the Exodar was used by a group of draenei to escape their perilous home on Outland. After departing the shattered draenei world, the Exodar appeared above northern Kalimdor when a spectacular explosion ripped open the skies. The great vessel impacted on the shores of Azuremyst Isle, which has since become home to Outland’s refugee draenei. Following their dramatic landing, the draenei have utilized the remains of the Exodar to great effect, transforming it into a base of operations for their dealings on Azeroth.

The recent influx of different races to Outland, particularly the ethereals, has resulted in increased hunting of the native elekk of Nagrand for their prized tusks. Yet in addition to being seen as game, these massive beasts are also valued for their ability to act as mounts. When the draenei fled Outland aboard the Exodar, they carried with them a number of species, including tamed elekk. Upon landing on Azeroth, these tusked-creatures played a large role in helping the draenei establish themselves on their strange new home. While much of Azeroth’s own native wildlife has served other races as trustworthy mounts, the draenei still prefer the hearty and unyielding elekk above all else.

Alongside Kil’jaeden and Archimonde, the wise prophet Velen ruled over the eredar race on the world of Argus. Unlike his brethren, however, Velen was gifted with the ability to foresee events to come. Thus, soon after the dark titan, Sargeras, approached the three leaders with offerings of knowledge and power, Velen received a vision that his people would ultimately become members of the demonic Burning Legion. While Kil’jaeden and Archimonde readily allied with Sargeras, Velen gathered other wary eredar and found sanctuary on the world of Draenor with the help of the enigmatic naaru race.

Not long ago, a number of draenei resettled on Azeroth, hoping to put a halt to the Legion’s murderous activities in Outland. Sensing great courage in the Alliance, Velen and his followers pledged themselves to this noble faction. The strengthened Alliance then helped the draenei reclaim their former holdings from the Legion. Most recently, Velen used the heart of a fallen naaru to sanctify the blood elves’ tainted Sunwell, transforming the sacred fount into a source of holy and arcane energies. Although the Legion’s forces in Outland have been greatly diminished and the demonic invasion of Azeroth has been driven back, Velen remains fearful of an upcoming war between light and shadow.