This article is a copy of "Dwarf", an official article from the 2010 BattleNet World of Warcraft Site. These articles overviewed the dwarf race in World of Warcraft prior to Legion. The original articles are no longer available, but they can still be viewed through online archives (see below). 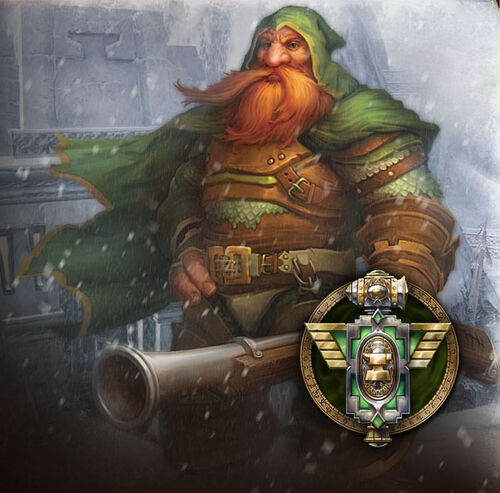 The bold and courageous dwarves are an ancient race descended from the earthen—beings of living stone created by the titans when the world was young. Due to a strange malady known as the curse of flesh, the dwarves’ earthen progenitors underwent a transformation that turned their rocky hides into soft skin. Ultimately, these creatures of flesh and blood dubbed themselves dwarves and carved out the mighty city of Ironforge in the snowy peaks of Khaz Modan.

For many long centuries, three dwarven clans—the Bronzebeards, the Wildhammers, and the Dark Irons—lived united in Ironforge under the wise rule of High King Modimus Anvilmar. When Modimus passed away from old age, tensions boiled over among the clans, and war erupted for control of the city. Thus began the War of the Three Hammers, a savage conflict that raged for many years, during which time the Bronzebeard clan won sole ownership of Ironforge and expelled its rivals. The war severed relations among the clans, and they went on to forge new destinies apart from one another.

Apart from reveling in the prospect of battle, the dwarves have long been interested in uncovering the truth of their enchanted past. Due to the efforts of dwarven archeologists scattered throughout the world, much has been learned about the race’s origins and the curse of flesh that afflicted the earthen. Many mysteries still remain, however, and the dwarves have continued excavating Azeroth’s ancient sites for answers.

Most recently, a twist of fate has drawn the rival clans back to Ironforge after they’d spent centuries apart….

When freak natural disasters began rocking much of Azeroth just prior to the Cataclysm, the dwarven lands were not spared from the calamitous upheavals. A series of violent quakes tore through areas surrounding Ironforge, reducing settlements to rubble and taking the lives of many innocent dwarves in the process. To glean answers as to the troubling state of the world, King Magni selflessly underwent a mystic ritual to commune with the earth. The archaic ceremony, however, had an unexpected effect: Magni was transformed into diamond and became fused to the depths of Ironforge itself.

In the power vacuum that followed, his estranged daughter, Moira, who had married into the much despised Dark Iron clan, briefly claimed Ironforge’s throne and effectively locked down the city. If not for the intervention of King Varian Wrynn of Stormwind and his son, Prince Anduin, her brash actions might have sparked another civil war. With Varian’s guidance, control of Ironforge has since been divided equally among the Bronzebeard, Wildhammer, and Dark Iron clans through the Council of Three Hammers. Yet as bitterness and prejudice fester among the clans, the council’s ability to govern as one remains uncertain.

Encircled by jagged mountain peaks, the snowy region of Dun Morogh has been the cultural heart of Ironforge’s dwarves for ages. Not long ago, quakes roused numerous troggs from their subterranean dwellings and drove the bestial creatures toward the dwarven settlement of Anvilmar in Coldridge Valley. The sudden influx of troggs also caused the savage Frostmane trolls to abandon their usual holdings on Shimmer Ridge and encroach upon dwarf-occupied areas. Threatened on two fronts, Dun Morogh’s mountaineers are spread thin. Without additional assistance, the prized lands of Dun Morogh might soon fall to the dwarves’ barbarous foes.

Carved into the stone heart of Khaz Modan, the mighty city of Ironforge is a testament to the dwarves’ strength and resilience. During the Second War between orcs and humans, many dwarven strongholds fell to the onslaught of the Horde, yet Ironforge was never breached. Now ruled over by the Council of Three Hammers, the city has entered into a tense and potentially violent era. Yet should the council rule with equality and justice, this new period in Ironforge’s history might very well be its greatest.

Distinguished by their shaggy coats and massive horns, Barak Tor’ol mountain rams are simple yet proud animals whose fearlessness is matched only by that of their dwarven masters. What these good-natured animals lack in ferocity, they compensate with uncommon durability and strength. Recently, other types of rams have been discovered in the frigid continent of Northrend, yet the amicable species native to Dun Morogh and its surrounding regions is still preferred by Ironforge’s dwarves.

Formed in the wake of King Magni’s petrification, the Council of Three Hammers is composed of one representative from each of the three dwarven clans. Muradin Bronzebeard, Magni’s younger brother and a veteran of the war against the Lich King, represents the Bronzebeards. Falstad Wildhammer, renowned gryphon rider and high thane of his clan, represents the Wildhammers. Moira Thaurissan, legal heir to the throne of Ironforge due to her lineage, represents the Dark Irons, the clan ruled by her late husband, Dagran. Despite their varying backgrounds and ideological differences, the three representatives have pledged to rule united for the good of Ironforge.