This article is a copy of "Gnome", an official article from the 2010 BattleNet World of Warcraft Site. These articles overviewed the gnome race in World of Warcraft prior to Legion. The original articles are no longer available, but they can still be viewed through online archives (see below). 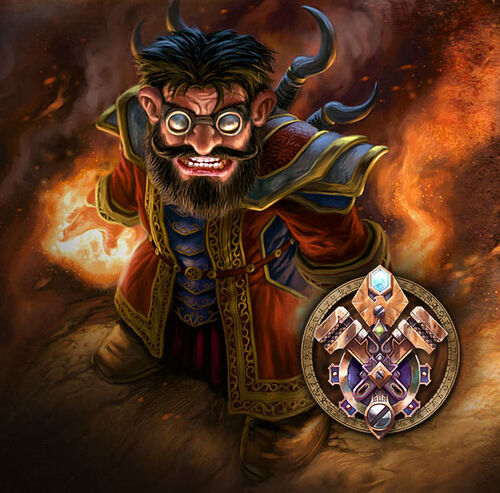 The clever, spunky, and oftentimes eccentric gnomes present a unique paradox among the civilized races of Azeroth. Brilliant inventors with an irrepressibly cheerful disposition, this race has suffered treachery, displacement, and near-genocide. It is their remarkable optimism in the face of such calamity that symbolizes the truly unshakable spirit of the gnomes.

A race of diminutive beings, gnomes have made their mark on Azeroth through the application of a collective intelligence and ambition overshadowing that of their larger peers. Gnomes are renowned mechanics, engineers, and technicians, widely respected for their knowledge of the scientific facets of the world and their ability to transform said knowledge into surprising tools, vehicles, armor, and weapons.

Little is known concerning gnomish history previous to the Second War—even among gnomes themselves. Much of gnomish philosophy is focused on forward-thinking, inventive concepts; little thought has ever been given to history or non-scientific records. However, recent developments have uncovered evidence of prehistoric mechagnomes created by the titans to help shape the lands of Azeroth. Like many of the titans’ creations, these helpers were afflicted with the curse of flesh, and they became what is known as the gnome race today.

It wasn’t until their discovery by the dwarves centuries later that gnomes were recognized as a viable and important race. The dwarves were impressed with the ingenuity and quickness of their smaller “kin” (for they had also been titan-forged and similarly cursed), and they assisted the gnomes in constructing a capital city, Gnomeregan, in the foothills of Dun Morogh near the dwarves’ own capital of Ironforge. From their wondrous techno-city, gnomes provided invaluable support in weaponry, vehicles, and energetic troops to the Alliance of dwarves, humans, and high elves.

But when the Burning Legion invaded, the gnomes strangely refused to send aid to their allies. It wasn’t until the war had ended that the Alliance learned the reason for the gnomes’ withdrawal. Around the time of the Third War, an ancient menace had risen from the bowels of Azeroth to strike at Gnomeregan. Knowing that their allies’ priority was defeating the Burning Legion, the gnomes decided to make their stand alone. Though they fought valiantly to save their beloved city, Gnomeregan was lost.

Most of the gnome race was wiped out during the fall of Gnomeregan; some say that as much as 80 percent of the gnomes died during those horrible days. The few survivors fled to the safety of nearby Ironforge. There they quietly went about rebuilding their forces, healing their wounds, and preparing to retake their ravaged city.

Just prior to the Cataclysm, the gnomes’ leader, High Tinker Gelbin Mekkatorque, led an attack on Gnomeregan’s invaders. It was a successful first maneuver, but there will be much more bloodshed before the entirety of the gnomeland is liberated.

In the ongoing effort to reclaim Gnomeregan from Sicco Thermaplugg and his twisted cohorts, the gnomes have carved out a tenuous foothold in New Tinkertown, near the techno-city’s gates. Although work is now under way to retrieve and decontaminate irradiated survivors from Gnomeregan itself, another battle has ignited in Dun Morogh against one of Thermaplugg’s henchmen, Razlo Crushcog. The perils of Gnomeregan are many, but the gnomes and their ingenious leader, High Tinker Mekkatorque, are resolute in facing any threat—be it trogg, toxic sludge, or sentry-bot—to take back their beloved gnomeland. To that end, neutralizing Crushcog before he can further disrupt Gnomeregan’s liberation has become pivotal to achieving victory.

A technical marvel, the subterranean city of Gnomeregan is wrought-iron evidence of gnomish brilliance, ambition, and ingenuity. It was carved into the stony foothills of Dun Morogh, and winds deep into the heart of the land. Currently a battleground between the founding gnomes and the traitor Sicco Thermaplugg, the once-gleaming metal hallways of this labyrinthine city are slowly being retaken.

The gnomes’ revolutionary mechanostrider is yet another marvel of their engineering prowess. Each strider is specifically designed with the individual rider in mind. Mechanostriders are constructed using state-of-the-art steam compression, servo-motor dynamics, and duro-steel plating, offering the rider a reliable and durable means of transportation. Some claim that the mechanostrider’s lack of true sentience makes for a very dumb mount. However, gnomes counter that, under a skilled rider, the mechanostrider is more responsive than even the best-trained live mount.

High Tinker Mekkatorque has been at the helm of the gnome race during some of its most difficult and trying times. Since his title is an elected one, the fact that he has held his position throughout such hardship is a testament to the love his people have for him.

A brilliant inventor, Gelbin Mekkatorque rose quickly to prominence among the meritocratic gnomes with his innovative designs and creative problem-solving skills. He built the very first functioning mechanostrider, assisted in the development of the dwarven siege engine, and was instrumental in the creation of the Deeprun Tram running from Ironforge to Stormwind City.

Although one wouldn’t know it from looking at him, the loss of Gnomeregan weighs heavily on the high tinker. He was unprepared for the invasion that swept through his beloved city, and he was betrayed by a trusted advisor who convinced him to react hastily, resulting in unnecessary deaths. Now Mekkatorque’s brilliant mind has taken on a surgical focus with one single outcome: the retaking of Gnomeregan.