This article is a copy of "Goblin", an official article from the 2010 BattleNet World of Warcraft Site. These articles overviewed the goblin race in World of Warcraft prior to Legion. The original articles are no longer available, but they can still be viewed through online archives (see below). 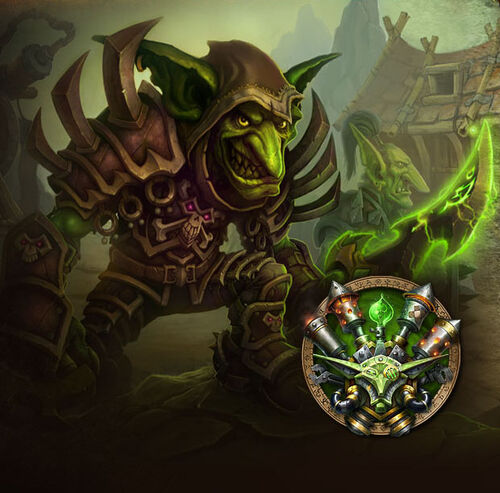 Originally the slaves of jungle trolls on the Isle of Kezan, goblins were forced to mine kaja’mite ore out of the volcanic bowels of Mount Kajaro. The trolls used this potent mineral for their voodoo rituals, but it had an unexpected effect on the slaves who were in constant contact with it: kaja’mite generated a startling new cunning and intelligence in the goblin race.

Crafting powerful artifacts of engineering and alchemy in secret, the goblins soon overthrew their oppressors and claimed Kezan for their homeland. The mines that had once been the goblins’ prison, their slave camp, and the base of their rebellion now became the city of Undermine. Weaving through the heart of the island in a dizzying network of tunnels, vaults, and lava tubes, Undermine epitomized the goblins’ complex, unpredictable mindset. It was there that they built the foundations of an empire, and the natural elements of craftiness (some would call it duplicity) inherent to the race were honed to a razor edge. The goblins’ inventions would help them rule the world—or at least own a profitable percentage of it.

To the goblins’ great dismay, the effects of the kaja’mite began to wear off, and their intelligence waned. Even worse, the ore itself became harder and harder to find. Supplies dwindled. Desperation ensued. The goblins’ once-brilliant inventions started to look haphazard and makeshift (a look that has become synonymous with the term “goblin-made”), and Kezan’s native swindlers soon realized that they would need to find other ways to supplement their avarice.

The goblins’ remaining craftiness (coupled with undiminished natural greed) soon lifted the race to preeminence as masters of mercantilism. Prominent trade princes rose to power during the First War as the cleverest goblins took advantage of the strife. Great fortunes were amassed, and the Isle of Kezan became a hub for fleets of goblin trading ships. One of the more ambitious trade princes agreed to lend his cartel’s services to the Horde in the Second War. Following the Horde’s defeat, the goblins learned from that trade prince’s failed example, realizing that their profits could double if they weren’t stuck in a restrictive relationship. By the end of the Third War, goblins were providing weaponry, vehicles, and devious services to both the Horde and the Alliance. But the gravy train wouldn’t last forever…

Recently, the Bilgewater Cartel—the goblin faction centered in Kezan—has found a new enemy in the Alliance. Unexpected and unprofitable encounters with the secretive SI:7 branch of King Varian’s forces have driven Trade Prince Gallywix from his comfortable neutrality. Reforging old pacts with their colleagues’ one-time allies, the goblins of the Bilgewater Cartel have been welcomed into the Horde with open arms.

Thanks to Kezan’s prominence as a mercantile hub, it’s been divided into dozens of districts by the trade princes, who view every inch of land as an opportunity waiting to be converted into gold and silver. Kezan’s tropical palms are bisected with miles of roadway, and even the beaches are beginning to be paved over by goblin ambitions. Now, nature is reclaiming the island of Kezan – massive Mount Kajaro has erupted with the Cataclysm, flooding the island with searing lava and sending tidal recoil sweeping through Kezan’s harbors.

Following the destruction of Kezan’s port homes, many of the Bilgewater Cartel’s surviving goblins have fled for their lives, joining their new Horde comrades and settling in Azshara’s Bilgewater Harbor. The town’s origins are often speculated on by non-goblins; Bilgewater Harbor sprang up in record time after the Kezan refugees’ arrival, and its’ quintessentially goblin construction has fostered an atmosphere of debauchery and disorder. Orgrimmar’s military has only recently set boots down in Bilgewater, but the harbor’s value as a strategic front conflicts with some pushy goblins’ desire to turn it into a new version of their ancestral home (abounding with gambling dens, pleasure houses and other commercial luxuries). This cultural rift is likely to breed tension in the ranks of the Horde sooner rather than later.

With the Bilgewater goblins now in the trenches with the bigger brutes of the Horde, a significant number of trampling deaths have been reported. Normally unconcerned with such matters, Trade Prince Gallywix was alarmed to learn that Garrosh’s Forsaken accountants refused to pay soldier death benefits if the soldiers never got to the actual battle, and accidental stomps caused by tauren maneuvers made it extremely difficult to calculate how many goblins had made it to the battlefield before they were rendered flat. Gallywix offered a substantial cash reward for an invention that could both lift goblins out of hoof traffic and speed them along at comparable velocities so that goblin soldiers could die in “a calculate-able and reimbursable fashion.”

Hundreds of submissions were made. Most exploded upon delivery. In the end, the clear (and relatively undamaged) winner was the sturdy transport trike created by the remarkably aged Jibidiah “No Fingers” Gragglefutz. Gragglefutz had been a street-side grenade salesman for decades, and years of product-related mishaps had borne fruit in this speedy, durable, and mostly unexplodable vehicle. Jibidiah gained some renown for his creation, and he now claims that Gallywix has him hard at work on a speedier “turbo” version of the trike. Jibidiah’s one complaint is that the substantial cash reward for designing the trike has been stuck in a particularly insidious mess of red tape and mail delivery issues. The trade prince apologizes for this and promises to put his top goblins on it immediately.

After the Cataclysm reawakened a volcano on his home island, Trade Prince Gallywix realized that there was good money to be made in offering panicked refugees a ticket to safety on his ship, taking their life savings—and then selling them into slavery. A clever plan, until it (and the ship) fell apart in the naval crossfire between an Alliance fleet and a lone Horde ship. The goblin survivors washed ashore on the Lost Isles off the coast of Kalimdor, where they discovered that the islands’ dense jungles harbored many mysteries and more than a few unpleasant surprises.