This article is a copy of "Human", an official article from the 2010 BattleNet World of Warcraft Site. These articles overviewed the human race in World of Warcraft prior to Legion. The original articles are no longer available, but they can still be viewed through online archives (see below). 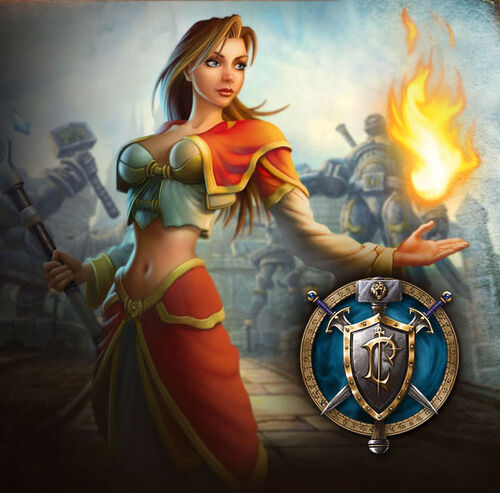 Recent discoveries have shown that humans are descended from the barbaric vrykul, half-giant warriors who live in Northrend. Early humans were primarily a scattered and tribal people for several millennia, until the rising strength of the troll empire forced their strategic unification. Thus the nation of Arathor was formed, along with its capital, the city-state of Strom.

After several centuries of peace, however, the increasingly prosperous and independent city-states of Arathor split into separate kingdoms: Gilneas to the west, Alterac, Dalaran, and Lordaeron to the northwest, Kul Tiras to the southwest, and Stormwind to the far south. Strom itself was renamed Stromgarde and remained a significantly powerful kingdom.

But disaster struck when the orcish Horde appeared on Azeroth, reducing Stormwind to ruins during the First War between orcs and humans. The city’s survivors, including the young prince, Varian Wrynn, fled to Lordaeron, where the leaders of the seven kingdoms resolved to unify once again in the Alliance of Lordaeron. Joined together, they succeeded in defeating the Horde during the Second War.

Tensions grew among the kingdoms, however, as the costs for maintaining the Alliance rose much higher than originally anticipated. Unwilling to pay the taxes, the leaders of Gilneas and Stromgarde chose to withdraw their kingdoms from the Alliance. Further disaster came when the kingdom of Lordaeron was decimated by a mysterious plague that killed thousands of humans and converted them into undead servants of the Lich King. Even Lordaeron’s prince, Arthas Menethil, was manipulated by the Lich King, leading Arthas to kill his own father and journey to Northrend, where he merged with his master. For the next five years, the Lich King remained in Northrend, plotting and building up his armies.

But unleashing the plague of undeath was merely preparation for an invasion by the demonic Burning Legion, which had long sought to destroy all life on Azeroth. When the Legion struck, humans banded together with other races and secured a costly victory during the Third War. Recently, members of the Horde and the Alliance launched separate campaigns in Northrend, and their efforts resulted in the Lich King’s crushing defeat.

Since the fall of Lordaeron, the kingdom of Stormwind has become the strongest bastion of humanity and the most powerful force in the now multiracial Alliance. Led by King Varian Wrynn, the people of Stormwind hold fast to the principles of honor and justice as they defend their settlements and their families.

Though humans are among the younger races on Azeroth, they have faced many challenges with fortitude and resilience. Their continued ability to adapt and rebuild has made them a vital force in an ever-changing world.

The peaceful woodlands to the south of Stormwind City seem more tranquil than ever since the fall of the Defias Brotherhood, but the inhabitants of Elwynn Forest are hardly idle. There are fields to sow, mines to work, and lumber to harvest. For all its pomp and grandeur, Stormwind wouldn’t last long without a constant stream of food and supplies to support the city’s population. This exchange has become increasingly threatened by kobold invasions, vicious feuds among farmers, and attacks from wild animals. Northshire Abbey remains dedicated to recruiting and training any adventurers brave enough to help keep the peace. Likewise, the Blackrock orcs are gathering their forces in the nearby Redridge Mountains. With Stormwind’s militia stretched thinner than ever, these renegade orcs stand ready to finally annihilate their old human enemies in Elwynn Forest.

No city better demonstrates human determination than Stormwind. Destroyed during the Horde’s initial invasion of Azeroth, Stormwind was painstakingly reconstructed by the Stonemasons’ Guild after the Second War. Parts of the city were razed again when Deathwing, the corrupted black Dragon Aspect, brutally attacked Stormwind, but the other undamaged districts are more beautiful than ever thanks to their hardworking inhabitants. From the magnificent Cathedral of Light, which serves as a major spiritual hub, to the awe-inspiring Valley of Heroes, which commemorates the sacrifices of Stormwind’s loyal champions, the city truly represents the courageous heart of humanity.

These trusty steeds have carried their human masters to battle since before the First War. Known for their swiftness and spirited temperaments, these mounts are perfectly suited for their heroic riders. The Evendales of Elwynn Forest are especially prized by adventurers for their loyalty and steadiness in the face of danger. Due to their overwhelming popularity, these horses can also be found in Theramore and even the Wetlands.

Varian’s life has been defined by tragedy and conflict. The murder of his father by the assassin Garona Halforcen weighs heavily on him, along with the accidental death of his wife, Tiffin, during a riot. The king has recently returned to the throne following his abduction by the Defias Brotherhood and the black dragon Onyxia, who disguised herself as Lady Katrana Prestor. Robbed of his memories and enslaved by a Horde gladiatorial trainer in Kalimdor, Varian fought his way to freedom, earning the nickname “Lo’Gosh,” or “ghost wolf,” while in battle. With the help of his comrades, he was able to recover his true identity and finally defeat Prestor. Known for his tenacity and fierce will, King Varian Wrynn is committed to protecting the Alliance’s interests and raising his son, Anduin, to follow in his place.