This article is a copy of "Night Elf", an official article from the 2010 BattleNet World of Warcraft Site. These articles overviewed the night elf race in World of Warcraft prior to Legion. The original articles are no longer available, but they can still be viewed through online archives (see below). 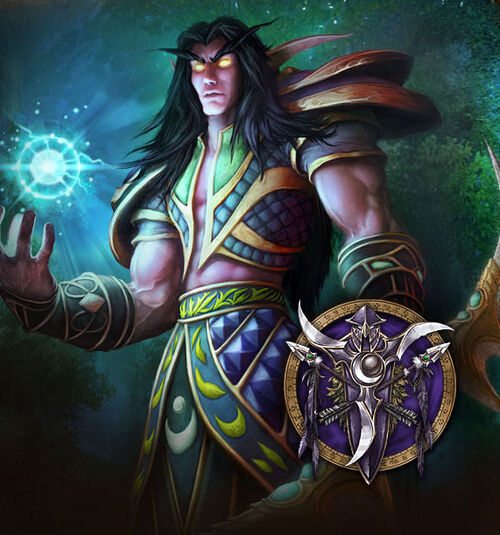 The ancient and reclusive night elves have played a pivotal role in shaping Azeroth’s fate throughout its history. More than ten thousand years ago, their heroics during the War of the Ancients helped stave off the demonic Burning Legion’s first invasion. When the scattered remnants of the Legion on Azeroth rallied together with the vile satyrs centuries later, the night elves again rose to meet the threat. The ensuing War of the Satyr exacted a heavy toll from the night elves, but ultimately they vanquished the forces that had set out to wreak havoc on their world.

The Legion’s emergence, however, had forever changed night elven society. The night elves had resolved to shun the practice of arcane magic because its reckless use had attracted the Legion to Azeroth. They cultivated a peaceful, naturalistic existence along the slopes of Mount Hyjal under the leadership of Tyrande Whisperwind. For many long years, Tyrande oversaw night elven governance, ever vigilant for signs of further demonic incursions. Much of this time was spent apart from her love, Malfurion Stormrage, who, alongside his fellow druids, upheld the balance of nature from within the Emerald Dream.

The night elves’ tranquil existence was shattered again when the Burning Legion launched a new invasion of Azeroth. At the height of this conflict—known as the Third War—the Legion and its terrifying undead Scourge assaulted the night elves’ lands. After awakening Malfurion and his druids from their slumber in the Dream, Tyrande gathered the other night elves, and they fought alongside the Horde and the Alliance to defeat the demon lord Archimonde and his minions at the summit of Mount Hyjal.

Although victorious, the night elves suffered greatly from the battle. Their beloved World Tree Nordrassil, created and blessed by the Dragon Aspects Alexstrasza, Ysera, and Nozdormu to grant the night elves immortality, had given off a massive blast of energy to slay Archimonde. To facilitate this colossal explosion, the night elves had chosen to forever sacrifice their protection from aging, disease, and frailty.

Over time, Nordrassil slowly began to heal its wounds, but a number of druids led by Fandral Staghelm desired to create another World Tree that would restore the night elves’ immortality. Malfurion warned against this act of self-interest, but when he suddenly fell into a coma, his spirit lost within the Dream, Fandral forged ahead with his plans unopposed. The second World Tree, Teldrassil, was planted off the northern coast of Kalimdor, and eventually it towered among the clouds.

Unlike Nordrassil, this new World Tree was not blessed by the Dragon Aspects, and thus it did not restore the night elves’ immortality. Rather, Teldrassil became tainted due to the Emerald Nightmare, a dark malady that had taken root within the Dream. In addition, it was learned that Malfurion’s dire ailment had been caused by this shadowy force. When he was finally awakened from his comatose state, Malfurion set about cleansing Teldrassil of its corruption, and he led efforts to contain the sinister Nightmare.

These momentous events have raised spirits throughout night elven society. Even so, this valiant race now faces many new challenges. Recent Horde attacks have seized night elven lands in Ashenvale, while areas along Kalimdor’s western coast have been decimated by the catastrophic upheavals unleashed in the wake of the Cataclysm. Still struggling to cope with the loss of their immortality, the night elves must prepare to stand against any threat as Azeroth itself breaks apart at the seams.

The loss of the first World Tree, Nordrassil, during the Third War ushered in a new era in night elven history—one in which this venerable race would no longer be immune to aging, disease, and frailty. As the night elves struggled to cope with their fate, Fandral Staghelm and a group of like-minded druids conspired to create a new World Tree that would restore the night elves’ cherished immortality. Through these druids’ efforts, Teldrassil was planted off the coast of northern Kalimdor, and the bulk of night elven society took up residence atop the new World Tree’s mighty boughs.

Teldrassil, however, was not blessed by the Dragon Aspects as Nordrassil had been, and thus the new World Tree did not change the fact that the night elves were mortal. Even worse, the World Tree and its inhabitants began to manifest signs of an unnatural ailment, later revealed to have been caused by the Emerald Nightmare. Much to the night elves’ dismay, it was discovered that Fandral had fallen to the Nightmare’s influence and had allowed Teldrassil’s corruption to take hold. Ultimately, Fandral’s wayward schemes were thwarted by the powerful archdruid Malfurion Stormrage, and Teldrassil was cleansed. To punctuate the victory over the Nightmare, the Dragon Aspects Alexstrasza and Ysera blessed the tree to ensure its vitality in the years to come. Yet as great and noble as this blessing was, it did not restore the night elves’ immortality.

Of late, Teldrassil’s recovery has slowed, and signs of the Nightmare’s corruption have resurfaced. Already burdened by political tension and the vast destruction unleashed by the Cataclysm, the night elves must now ascertain the cause of their beloved World Tree’s ailment and refocus their efforts on the dire situation facing Azeroth.

Atop the massive boughs of the second World Tree, Teldrassil, lies the wondrous city of Darnassus. The elegant bridges, beautiful groves, and leaf-covered pathways that dot the city’s landscape are testaments to the night elves’ reverence for nature. One of Darnassus’s most notable structures is the stunning Temple of the Moon, the center of worship for High Priestess Tyrande Whisperwind and her Sisters of Elune.

Darnassus is home to night elves of all vocations, and the city has recently opened its doors to human refugees from Gilneas as well. Many of these embattled humans have contracted a strange curse that transforms them into feral wolf-beasts known as worgen. Although they’re usually reclusive, the night elves have allowed these outsiders into Darnassus because they know the perils of the Gilneans’ cursed state all too well: it was, in fact, a group of night elf druids that created Azeroth’s first worgen millennia ago. Despite the arrival of these new residents, Darnassus remains a symbol of the night elves’ rich culture and glorious history.

Nightsabers are considered to be among Kalimdor’s most vicious creatures. In ancient times, none of the continent’s denizens was safe from these agile beasts’ swift and ruthless attacks. The night elves saw great potential in the ferocious nightsabers, domesticating the species’ finest pedigrees to act as battle mounts. In particular, the highly trained Sentinels used them to great effect while patrolling the borders of night elven lands. To this day, nightsabers remain an invaluable part of the night elves’ culture as companions, hunters, and mounts.

Since the War of the Ancients, High Priestess Tyrande Whisperwind and her mate, Archdruid Malfurion Stormrage, have led the once-immortal night elves. Time and again, Tyrande’s and Malfurion’s wise guidance has helped the night elves prevail against the demonic Burning Legion and other perilous enemies. For many of the past ten thousand years, however, Tyrande has borne the mantle of leadership alone while Malfurion has spent long stretches of time preoccupied with his duties in the Emerald Dream.

Shortly after the Third War, Malfurion became trapped within the Emerald Nightmare, a shadowy affliction that had spread throughout the Dream. Due to Tyrande’s brave actions, Malfurion was later freed, leading to a grand reunion and wedding between the two leaders. Now, amid political turmoil, natural disasters, and violent Horde incursions into night elven lands, Malfurion and Tyrande are focused on leading their people into Azeroth’s uncertain future, just as they have done in ages past.