This article is a copy of "Orc", an official article from the 2010 BattleNet World of Warcraft Site. These articles overviewed the orc race in World of Warcraft prior to Legion. The original articles are no longer available, but they can still be viewed through online archives (see below). 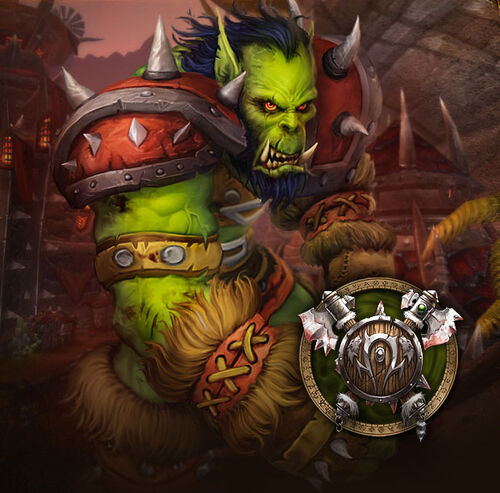 Unlike the other races of the Horde, orcs are not native to Azeroth. Initially, they lived as shamanic clans on the lush world of Draenor. They abandoned their peaceful culture when Kil’jaeden, a demon lord of the Burning Legion, corrupted the orcs and used them in his vengeful plot against the draenei, who were exiles from Kil’jaeden’s homeworld.

Because of the demons’ manipulation, most of the orc chieftains drank the blood of a Burning Legion pit lord, Mannoroth the Destructor. This act infused the orcs with power, but at a great price: they were now enslaved to the Legion. Constant exposure to fel energies turned the orcs’ naturally brown skin to a sickly green, and the orcs’ usage of fel magic caused their ancestral lands to wither and die.

As Kil’jaeden had planned, the orcs succeeded in killing most of the draenei population. Now Kil’jaeden was ready to test the orcs’ effectiveness against another old enemy. Thousands of years before, the demons had launched an invasion of Azeroth that had ultimately failed, but this time the orcs could fight in the Legion’s stead. To that end, the corrupted human archmage Medivh contacted the orc warlock Gul’dan. Together they constructed the Dark Portal, which allowed the orcs to travel to Azeroth.

After their arrival, the orcs crushed the unsuspecting human kingdom of Stormwind. The mighty orc armies, known as the Horde, then pressed north through the Eastern Kingdoms, and their victory was nearly assured for a time. Eventually, however, internal conflicts resulted in the orcs’ defeat, and those who did not die in battle were rounded up and placed in internment camps. But a young slave named Thrall managed to escape from captivity and join a liberation force consisting of Warchief Orgrim Doomhammer and other free orcs. When Doomhammer fell in combat, Thrall became the new warchief of the Horde and the inheritor of Doomhammer’s namesake weapon.

Thrall and his people later journeyed across the sea to the distant continent of Kalimdor. Within the forests of Ashenvale, the warchief and his mentor, Grommash Hellscream, confronted Mannoroth. In the end, Grom gave his life to kill the pit lord and remove the blood-curse from the orcs forever. A new chapter began for the orcs: war was no longer the driving focus of their culture, and they settled the land along Kalimdor’s eastern coastline, which Thrall named Durotar.

Years later, the warchief and many others returned to the remnants of Draenor, now known as Outland, to prevent another attack from the Burning Legion. There Thrall met Garrosh, son of Grom Hellscream, and convinced him to join the Horde and return to Azeroth as an advisor. Garrosh was a leading commander during the battles against the Lich King in Northrend, and also gained popularity for his fiery personality.

In addition to his commitments as leader of the Horde, Thrall was a dedicated shaman with close ties to the elements. When he noticed severe disturbances in the elemental spirits, Thrall knew that he had to step down as warchief in order to investigate the situation lest all of Azeroth fall into chaos. Given his options, Thrall believed that Garrosh was the clear choice for warchief. But the impulsive young Hellscream is much more aggressive than his diplomatic predecessor. With the equally tempestuous King Varian Wrynn back on the throne of Stormwind, it seems likely that the orcs will need their famed strength now more than ever.

The dry, harsh land of Durotar is home to some of the toughest creatures on Azeroth. Unwary travelers may fall prey to venomous scorpids, ferocious crocolisks, or angry quilboar. Thrall chose to settle this inhospitable area after the Third War as penance for the orcs’ past transgressions. He named the land after his father, Durotan, former chieftain of the Frostwolf clan. Following the Cataclysm, many of the orcish settlements were flooded or destroyed, and the Northwatch soldiers at Tiragarde Keep have become more aggressive than ever. As relations worsen between the Alliance and the Horde, it is essential that the orcs contain these threats swiftly to ensure the survival of their people.

Named for the former Horde warchief Orgrim Doomhammer, this capital was rapidly constructed when the orcs first settled in Durotar. Garrosh Hellscream has recently rebuilt most of the city’s architecture, and now Orgrimmar’s fortresses rank among the most imposing on Azeroth. Spiked metal towers line the city’s streets, and the red-and-black banners of the Horde wave from every post. Most of the various races have separated into their own districts, from the tauren in the Valley of Wisdom to the trolls in the Valley of Spirits. Grommash Hold towers over all else, allowing Garrosh Hellscream to keep a close watch on his people.

Long ago, the orcs tamed the large and swift wolves of Draenor. These massive canines came to be the orcs’ chosen companions as well as their favored method of transportation. The wolves’ unflinching temperament made them especially well-suited for battling large prey. When the orcs became more warlike and invaded Azeroth, their wolves were bred for size and stamina so they could bear armored riders into battle. Dire wolves remain the favored mounts for orc fighters and can be purchased in the Valley of Honor in Orgrimmar.

Garrosh grew up on Draenor in the shadow of his father, the great warrior Grommash Hellscream. Chieftain of the Warsong clan, Grom was the first orc leader to drink the blood of Mannoroth, subjugating the orcs to the Legion’s will. Before this event, Garrosh was among several orcs who had become ill with the red pox. They had been quarantined far away in Nagrand, allowing them to escape the demonic corruption. The younger Hellscream was ashamed of his father for many years until he met Thrall and learned of Grom’s heroic redemption. Garrosh has since embraced his potential as a strong leader, most notably in Northrend, where he directed the Horde advance through the Borean Tundra and won the hearts of his people. Uncompromising and fiercely proud, Hellscream intends to restore the orcs’ glory by any means necessary.