This article is a copy of "Pandaren", an official article from the 2010 BattleNet World of Warcraft Site. These articles overviewed the pandaren race in World of Warcraft prior to Legion. The original articles are no longer available, but they can still be viewed through online archives (see below). 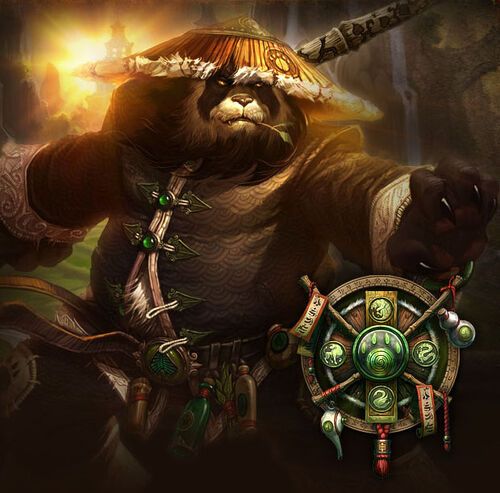 Denizens of a wondrous and fertile land, the pandaren once labored under the oppressive thumb of a monstrous race of ancient warlords known as the mogu. Through tenacity, diplomacy, and a unique form of unarmed combat, the pandaren staged a successful revolution that deposed the mogu and established a pandaren empire that would prosper for thousands of years.

Honorable and filled with a love of good company, good food -- and every now and then, a good friendly brawl -- the pandaren have been content to live in seclusion, allowing their culture to flourish and thrive away from the influence of the outside world. However, every now and then, a pandaren is born with a thirst for adventure that rivals his or her thirst for a strong drink, and he or she strikes out to explore beyond Pandaria’s shores. One of the most famous such wanderers was the brewmaster Chen Stormstout, who set out looking for exotic ingredients for his special ale and wound up an integral part of the founding of the Horde.

During the bleak days that preceded the sundering of the world, when demons flooded onto Azeroth and threw the entirety of the mortal realm into jeopardy, the last Emperor of the pandaren discovered a way to protect his land from the devastation. His deal with fate shrouded his land within an impenetrable mist for ten thousand years, but the nature of his transaction has left Pandaria haunted ever since...

It is the rare pandaren indeed who sought a way beyond the mists of Pandaria. Generations ago, pandaren explorers began to gather on the back of a giant turtle: Shen-zin Su. This great sea turtle roamed Azeroth's oceans for hundreds of years, eventually losing contact with their mist-shrouded homeland.

Here on the “Wandering Isle” young, eager pandaren train and learn, engaging in mock combat against one another and mastering the tools and forms of martial arts.

When Shen-zin Su travels near the Maelstrom, life on the Wandering Isle—once pacific and enlightening—is cast into crisis. The ground becomes unstable and Shen-zin Su’s very life is threatened as the great turtle drifts into an unsteady pattern which may be a death spiral.

As one of the most promising pandaren wanderers, you must uncover the true threat to the Wandering Isle. But the problem facing the great turtle has several potential solutions, and the students of the isle are split on how to handle it. Your decision will shape the future, and mark the path of the pandaren in a changed world.

Shrouded in fog since the world was sundered more than ten thousand years ago, the ancient realm of Pandaria has remained unspoiled by war. Its lush forests and cloud-ringed mountains are home to a complex ecosystem of indigenous races and exotic creatures. It is the homeland of the enigmatic pandaren, a race that celebrates life to the fullest even while under siege by an ancient menace.

The new continent reveals itself to a broken world just as the Alliance and Horde are spiraling ever closer to a war that will consume all of Azeroth. Will the mists of Pandaria part to reveal the world's salvation? Or will the battle to control this rich and breathtaking new land push the two mighty factions over the brink of war and into total annihilation?

The pandaren have long sought mounts that embody their values: patience and strength. With a naturally armored hide, even gait (no matter how heavy the passenger), and the relaxed attitude that welcomes long journeys, the Dragon Turtle is perfect for the pandaren adventurer. Indigenous to mainland Pandaria, these fine steeds are easily outfitted with the essentials: maps, cushions, footstools, and brew-storage. Comfortable and hardy, the dragon turtle’s slow, even stride will gently ease passengers into new parts of the world and/or a relaxing nap time.

Aysa Cloudsinger is a follower of the path of Tushui who believes in living a venerable life through meditation, rigorous training, and moral conviction. Graceful and poised, Aysa has attained impeccable form and a refined intellect through diligent practice. To Aysa, to follow the way of Tushui is to defend what is right above all else. She believes that success in any endeavor never justifies dishonorable deeds. While the Alliance contains a diverse mix of cultures, Aysa is attracted to the high ideals and values that cement the Alliance together.

Ji Firepaw, a follower of the more direct Houjin philosophy, is adamant that inaction is the greatest injustice. Ji holds that it is honorable to defend home and family no matter the price. Outgoing, passionate, and not one for deep thought, he is always the first into the fray. Ji finds himself attracted to the scrappy practicality that defines the Horde, and although it costs him dearly, Ji has decided to carry the banner of the Horde upon leaving the Wandering Isle.