This article is a copy of "Tauren", an official article from the 2010 BattleNet World of Warcraft Site. These articles overviewed the tauren race in World of Warcraft prior to Legion. The original articles are no longer available, but they can still be viewed through online archives (see below). 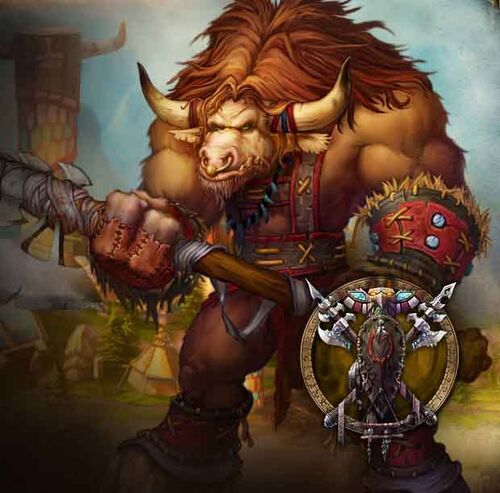 The peaceful tauren—known in their own tongue as the shu’halo—have long dwelled in Kalimdor, striving to preserve the balance of nature at the behest of their goddess, the Earth Mother. Until recently, the tauren lived as nomads scattered throughout the Barrens, hunting the great kodo beasts native to the arid region.

Although split into different tribes, the tauren were united by a common enemy: the marauding centaur. These primitive horse-men terrorized central Kalimdor, leaving only death and suffering in their wake. Although the tauren tribes struggled valiantly for survival against their foes, the relentless centaur attacks continued. Over time, the centaur wiped out the area’s wild game, threatening starvation for the beleaguered tauren. During the Third War, the mighty chieftain Cairne Bloodhoof had a chance encounter with the orcish Horde that would alter the destiny of the tauren forever. After befriending Warchief Thrall, Cairne and his Bloodhoof tribe were able to fend off the centaur as they journeyed to the fertile lands of Mulgore. Owing a blood-debt to the orcs for their assistance, the tauren joined Thrall on Mount Hyjal to defend Kalimdor from an invasion by the demonic Burning Legion.

Following the Legion’s defeat, the tauren who helped defend Hyjal returned to their new home in Mulgore. Ruling from the majestic capital of Thunder Bluff, Cairne welcomed tauren of every tribe to this secure refuge. Many tauren who traveled to the capital were content with Cairne’s vision of a peaceful and harmonious future, but at least one tribe felt otherwise. The stern Grimtotem tribe looked upon Kalimdor’s other races as inferior and believed that its matriarch, Magatha, was the only one fit to rule the tauren. Although Magatha constantly disagreed with Cairne over the direction of their nation, the elder crone nonetheless coexisted alongside him in Thunder Bluff without major incident. The Grimtotem tribe did not, however, join the Horde along with Cairne and the tauren under his rule.

For years the tauren flourished throughout Mulgore, but tragedy befell the noble race following the campaign against the Lich King in Northrend. Believing that the reckless new warchief, Garrosh Hellscream, would lead the Horde to ruin, Cairne challenged the young upstart to a duel. The tauren high chieftain fought with a ferocity that belied his age, but an act of betrayal had sealed his fate before the battle had even begun. Unbeknownst to either of the duel’s combatants, Magatha had poisoned Garrosh’s blade. After Cairne was wounded by the tainted weapon during combat, he was immobilized by the poison, and Garrosh was able to slay him.

Following the high chieftain’s death, Magatha’s Grimtotem agents stormed Thunder Bluff and seized the tauren capital as their own. They had also hoped to murder Cairne’s son, Baine, but the young tauren managed to elude his would-be assassins. After formulating a strategy to exact retribution upon Magatha, Baine launched a counterattack and wrested Thunder Bluff from the hands of the treacherous matriarch. Ultimately, rather than spill further blood, Baine banished Magatha and all other Grimtotem who still supported her from tauren lands.

Despite the deadly encounter between Cairne and Garrosh, the tauren have not abandoned their place in the Horde. While many chaotic events have transpired in recent months, Baine has bravely taken up the mantle of tauren leadership and is now focused on ruling just as his wise and benevolent father would have.

After settling in the grasslands of Mulgore, the mighty tauren established the stunning capital of Thunder Bluff. For years afterward the tauren lived amid central Kalimdor’s serene plains, tending to the well-being of their beloved new home. Yet the recent Cataclysm has had disastrous effects on Mulgore. Driven from their dens south of Thunder Bluff, the barbaric quilboar have swarmed across Red Cloud Mesa, encroaching on Camp Narache. Apart from taking numerous tauren captive, the quilboar have caused giant thorned roots to burst from the ground, choking all life from the once-verdant plains. In light of this, the tauren have vowed to drive away the savage creatures and heal the wounds inflicted upon the land before the damage becomes irreparable.

Established by the wise chieftain Cairne Bloodhoof and his stalwart tribe, Thunder Bluff overlooks the verdant land of Mulgore from atop a series of windswept mesas. Prior to the construction of the capital, the tauren had lived as nomads for countless generations, often under attack by marauding bands of centaur. With Thunder Bluff’s founding, however, the proud and good-spirited race was finally granted a permanent home.

Following Cairne’s death in a duel with Warchief Garrosh Hellscream, Thunder Bluff was briefly seized in a coup by Magatha Grimtotem and elements of her tribe. In retaliation, Cairne’s son, Baine, launched a brilliant counterattack using a fleet of zeppelins. After he strategically divided Magatha’s forces, Baine recaptured Thunder Bluff and assumed his role as the high chieftain of the tauren. Having recovered from the recent unrest, the capital is once again a bastion of peace and security for Kalimdor’s tauren.

Tauren legends abound regarding the great horned kodos of Kalimdor’s Barrens. Some myths tell of rare kodos that are bound to the spirits of the sky and storm, thus allowing the colossal beasts to harness the powers of lightning itself. While kodos are generally considered gentle by nature, they are fierce opponents when threatened and have occasionally been known to devour their enemies whole.

High Chieftain Baine Bloodhoof is the son of the late tauren leader, Cairne Bloodhoof. In addition to embodying his father’s kindness and valor, Baine has developed into a warrior without equal. Following Cairne’s death in a duel with Warchief Garrosh Hellscream, Baine fled his home in Bloodhoof Village when the tauren matriarch Magatha Grimtotem’s agents attacked the village and seized Thunder Bluff. Although still pained by the loss of his father, Baine staged a counterattack on Magatha and her forces, ultimately retaking the tauren capital.

In the end, Cairne’s honorable son spared Magatha’s life, banishing the matriarch and her traitorous allies to the harsh Stonetalon Mountains. Since then Baine has assumed the role of high chieftain of Mulgore’s courageous tauren. While bitterness might still linger over Cairne’s demise, Baine has pledged his loyalty to the Horde and its warchief for the good of the tauren race.