This article is a copy of "Troll", an official article from the 2010 BattleNet World of Warcraft Site. These articles overviewed the troll race in World of Warcraft prior to Legion. The original articles are no longer available, but they can still be viewed through online archives (see below). 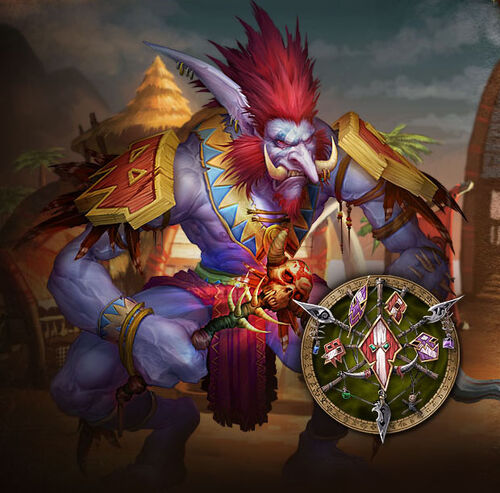 The savage trolls of Azeroth are infamous for their cruelty, dark mysticism, and seething hatred for all other races. Yet one exception among the trolls is the Darkspear tribe and its cunning leader, Vol’jin. Plagued by a history of subservience and exile, this proud tribe was on the brink of extinction when Warchief Thrall and his mighty Horde forces were driven to the trolls’ remote island home in the South Seas during a violent storm.

Led at that time by Vol’jin’s wise father, Sen’jin, the Darkspears abandoned their prejudices and worked together with Thrall’s orcs to defeat a group of humans encroaching on the jungle isle. With unparalleled bravery, the trolls fought side by side with the Horde to secure victory, but tragedy befell the Darkspears soon afterward. Intent on appeasing a mysterious sea witch, a frenzied band of murlocs captured the isle’s defenders. Although a number of the imprisoned orcs and trolls managed to escape, the noble Sen’jin was slain by his captors.

In Sen’jin’s honor, Thrall welcomed the Darkspears into the Horde and offered them sanctuary in a new kingdom that he planned to create across the Great Sea. The trolls accepted Thrall’s offer, and Vol’jin eventually led his tribe to the vibrant jungles of the Echo Isles located just off the rugged coastline of Durotar.

Not long after they settled on their new home, the Darkspears suffered a terrible betrayal from within. Driven to insanity by the dark powers under his control, the witch doctor Zalazane began enslaving his fellow tribespeople and amassing an army of mindless trolls. For a time, Vol’jin and other uncorrupted Darkspears fled to Durotar’s coast and established Sen’jin Village. From this crude settlement, the trolls struck at Zalazane’s forces, hoping to win back their home at any cost. The Darkspears’ efforts, however, failed to drive Zalazane from the Echo Isles.

Following the victory against the Lich King in the frozen continent of Northrend, Vol’jin renewed his bid to defeat Zalazane and launched a brilliant assault on the isles. With the help of the tribe’s ancestral loa, the courageous Darkspears killed the maddened witch doctor and seized their embattled home.

Of late, political changes within the Horde have sparked fears among the Darkspear tribe regarding its future. Vol’jin’s close ally Thrall recently named Garrosh Hellscream temporary Horde warchief. Thus far, the brash young orc has put the Darkspear leader and his tribe on edge, causing many trolls to leave the Horde capital, Orgrimmar. Although spirits are high among the Darkspears after Zalazane’s fall, tension lingers concerning what place the trolls will have in Garrosh’s Horde.

The Echo Isles are a small cluster of tropical landmasses located near the arid coast of Durotar. In addition to being the home of the Darkspear trolls, the archipelago teems with raptors, tigers, and other dangerous predators. Yet the hostile wildlife is the least of the tribe’s worries. Although the Darkspears have liberated the Echo Isles from Zalazane, a mysterious sea witch has recently appeared and begun using her dark sorcery to destroy the trolls’ way of life. Additionally, naga have overtaken territory just north of Darkspear Isle, the seat of power for the tribe and its leader, Vol’jin. Having been exiles throughout their history, the Darkspears are prepared to make any sacrifice in order to protect their home. Even now, a new generation of fearless trolls is training on Darkspear Isle, ready to give its lives for the future of the tribe.

Ever since defeating the traitorous witch doctor Zalazane, Vol’jin and his tribe have worked tirelessly to fortify their home on Darkspear Isle. Covered in a network of huts and bridges, this jungle island has become a symbol of the tribe’s glory, albeit at a time when the trolls’ destiny remains uncertain due to political tension between Vol’jin and Warchief Garrosh Hellscream. Regardless, the Darkspear tribe has vowed to stand firm and face whatever challenges lie ahead.

The ferocity of Kalimdor’s raptors has enthralled the Darkspear trolls ever since their arrival on the Echo Isles years ago. The tribe considers a raptor to be the purest embodiment of the hunter’s essence, and as such, a tamed reptilian is prized as a mount. Skilled Darkspear riders have even been known to channel their raptors’ savagery to suit their will. Possession of these predators is also one of the most auspicious signs of status among trolls; many have died trying to subdue these swift and deadly raptors, and to control one indicates great station.

Vol’jin has sworn to do everything in his power to lead the Darkspear tribe just as his late father, Sen’jin, would have. For years Vol’jin resided in Orgrimmar, offering strategic advice to Thrall and assisting with critical operations such as retaking the Undercity after the Forsaken bastion had been usurped by Grand Apothecary Putress and the dreadlord Varimathras. Recently, however, Vol’jin has come into conflict with the Horde’s new warchief, Garrosh Hellscream. Alienated by the orc’s extremism and lust for war, the troll leader helped overthrow him, and has since taken up the mantle of Warchief of the Horde.