This article is a copy of "Undead", an official article from the 2010 BattleNet World of Warcraft Site. These articles overviewed the undead race in World of Warcraft prior to Legion. The original articles are no longer available, but they can still be viewed through online archives (see below). 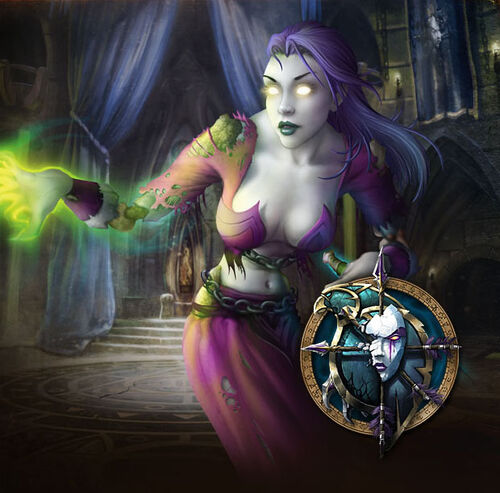 Death offered no escape for the scores of humans killed during the Lich King’s campaign to scour the living from Lordaeron. Instead, the kingdom’s fallen were risen into undeath as Scourge minions and forced to wage an unholy war against everything… and everyone… that they once held dear.

When the Lich King’s grasp on his vast armies faltered after the Third War, a contingent of undead broke free of their master’s iron will. Although this freedom seemed to be a blessing at first, these former humans were soon tormented by memories of the unspeakable horrors that they had committed as mindless Scourge agents. Those who did not descend into madness were faced with a chilling realization: the entirety of Azeroth sought their destruction.

In their darkest hour, the renegade undead were rallied together by the former ranger-general of Quel’Thalas, Sylvanas Windrunner. Defeated during an attack on her kingdom and transformed into a powerful Scourge banshee, Sylvanas had also regained her freedom from the Lich King. Under their new queen’s guidance, the independent undead – known as Forsaken – established the Undercity beneath the ruins of Lordaeron’s capital. While some Forsaken feared Sylvanas, others valued the security she provided. Many of the free-willed undead, however, found a purpose to their cursed existence through the banshee queen’s burning desire to destroy the Lich King.

Despite not being affiliated with the Scourge, the Forsaken came under threat from humans who were dedicated to eradicating all Forsaken. As a means to further her own goals and protect her budding nation, Sylvanas sent emissaries to various factions in search of allies. The kind-hearted tauren of Thunder Bluff proved to be the most promising contact. Specifically, Archdruid Hamuul Runetotem saw the potential for redemption in Sylvanas’ people, even though he was fully aware of the Forsaken’s sinister nature. Thus, the tauren convinced Warchief Thrall, despite his misgivings, to forge an alliance of convenience between the Forsaken and the Horde. In the end, the Forsaken’s chances of victory against the Lich King were bolstered, while the Horde gained an invaluable foothold in the Eastern Kingdoms.

Ultimately, the Forsaken assisted the Horde with a massive offensive against the Lich King’s power base in Northrend and exacted vengeance upon their hated enemy. The victory, however, was not without its hurdles. During the invasion, Grand Apothecary Putress unleashed a new plague that killed friend and foe alike, while his traitorous counterpart, the dreadlord Varimathras, seized the Undercity in a coup that nearly killed Sylvanas. The usurpers were slain for their vile deeds and the Forsaken capital was restored, but the debacle created suspicion among the Horde regarding Sylvanas’ loyalties.

Now, along with being mistrusted by her own allies, Sylvanas recognizes that many of Azeroth’s other inhabitants still see her people as a threat, even after the Lich King’s defeat. As their numbers dwindle by the day, the Forsaken have begun fortifying their holdings around the Undercity, working to prove their loyalty to the Horde’s cause even as they ready themselves for any future attacks.

Once the heart of Lordaeron, Tirisfal Glades was a land of beautiful rolling hills and golden pastures. When the human kingdom fell to the undead Scourge, this verdant region was transformed into a plagued wasteland, barely able to sustain the dwindling remnants of life that still existed.

For years this blighted area has been home to Queen Sylvanas and her Forsaken, as well as the remaining vestiges of the Scarlet Crusade. Their zealots, bent on wiping out any and all undead from Azeroth regardless of affiliation, have long been a thorn in the Forsaken’s side. Recently, the Argent Dawn has offered assistance to Sylvanas’ people against the Crusader’s constant harassment in eastern Tirisfal Glades. In addition, the Forsaken have begun a fresh march on their enemy’s stronghold – the Scarlet Monastery – in an effort to finally secure their homeland from external threats.

During the Third War, the once-glorious capital of Lordaeron, Capital City, was decimated by a Scourge army under the command of Prince Arthas Menethil. When the undead continued their campaign against the living throughout the continent, only a small contingent of Arthas’ forces were left behind to carve out a new “Undercity” beneath the ruined capital. Yet these plans were abandoned when Arthas departed for Northrend in order to aid his master, the Lich King.

Years later, Queen Sylvanas and her renegade undead, known as the Forsaken, claimed the Undercity as their own and completed the winding network of catacombs and crypts that the Scourge had begun constructing. Apart from being momentarily seized by the traitorous Forsaken Grand Apothecary Putress and the dreadlord Varimathras, the Undercity has remained in firm control of Sylvanas ever since. Today, rivers of poisonous sludge flow through all avenues of the vast Undercity. The toxic fumes and fetid odors permeating every corner of the stronghold have made it a place almost unbearable for the living members of the Horde. Yet for Sylvanas and her cursed followers, the Undercity has become a much-needed refuge in a world where her kind is still feared and hunted.

When the Lich King’s plague of undeath swept through Lordaeron, it decimated more than just the kingdom’s human population. Many of the noble horses living in the region also succumbed to the affliction, and much like their human counterparts, they were not granted peace in death. Through their mastery of alchemy and necromancy, the Royal Apothecary Society has raised these fallen steeds into undeath in order to bolster the Forsaken’s effectiveness in battle and also provide a means for everyday transportation. Although strong and resilient, these mighty steeds have earned a reputation among their handlers as being incredibly stubborn. Regardless, having no need for sleep or sustenance has made these skeletal horses the perfect counterparts for their relentless masters.

In life, Sylvanas Windrunner was the valiant ranger-general of Quel’Thalas, a high elf whose leadership acumen and martial prowess were without equal. During the Third War, she bravely defended her kingdom from a Scourge invasion led by the death knight Arthas. Ultimately, however, Sylvanas fell in battle. Rather than honor the ranger-general with a quick death, Arthas ripped out her soul and transformed it into a banshee: a cunning and vengeful agent of the Lich King empowered by hate.

When the Lich King’s control over his minions weakened, Sylvanas broke away from her tyrannical master’s control and reclaimed her body. Vowing to avenge her death, Sylvanas gathered other renegade undead and set out to wage war against the Scourge. Thus it was that the Forsaken and their banshee queen came to be. Under Sylvanas’ command, the Forsaken joined the Horde and later helped bring about the Lich King’s fall in the frozen wastes of Northrend.

Yet many challenges still lay ahead for Sylvanas. After an uprising within her ranks that killed other members of the Horde, the banshee queen is now mistrusted by many of her allies. Most recently, Sylvanas began fortifying her territory within the Tirisfal Glades in order to establish a proper kingdom for her followers. While Sylvanas maintains that her loyalty to the Horde is undiminished, some of the faction’s members are uncertain about her true intentions.