This article is a copy of "Worgen", an official article from the 2010 BattleNet World of Warcraft Site. These articles overviewed the worgen race in World of Warcraft prior to Legion. The original articles are no longer available, but they can still be viewed through online archives (see below). 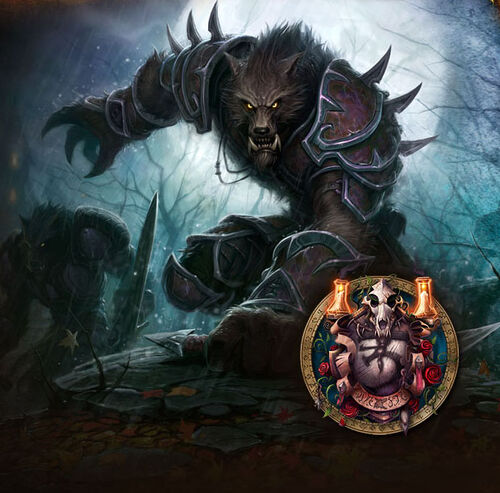 Behind the formidable Greymane Wall, a terrible curse has spread throughout the isolated human nation of Gilneas, transforming many of its stalwart citizens into nightmarish beasts known as worgen. The origins of this curse have been fiercely debated, but only recently has the startling truth come to light.

Long ago, amid a brutal war between the night elves and the demonic satyrs in Kalimdor, a group of druids practiced a powerful yet unwieldy form that embodied the fury of the wolf Ancient, Goldrinn. Taught by Ralaar Fangfire, these Druids of the Pack sought to temper the uncontrollable rage inherent in their chosen form. To do so, they willingly submitted to the energies of the Scythe of Elune, a mystical artifact created from Goldrinn’s fang and the staff of Elune.

Rather than abate the druids’ fury, however, the weapon transformed Ralaar and his followers into worgen: bestial humanoids enslaved by their own primal instincts. Blinded by all-consuming rage, Ralaar’s druids tore through friend and foe alike during battle with the satyrs. Night elves wounded by the unruly beasts contracted a virulent curse that turned them into worgen as well. Desperate to stanch the affliction’s spread, Archdruid Malfurion Stormrage mournfully banished the worgen to a pocket dimension of the Emerald Dream, where they would be in peaceful slumber for all eternity.

The worgen threat was contained for millennia, until Archmage Arugal managed to pull the wolf-beasts from the Dream. Summoned by order of King Genn Greymane, the worgen were used to battle Scourge forces encroaching on the kingdom of Gilneas. Yet the feral creatures soon spread their curse throughout the human population of Silverpine Forest, infecting Gilnean soldiers stationed beyond the Greymane Wall. Before long the affliction had advanced through the legendary barrier and was gradually eating away at Gilneas’s humanity. As reports of strange attacks and disappearances rose, fear took root in the hearts of Genn’s people.

Not long ago the curse’s spread was stifled, but the victory proved short-lived. Now, at a time when Gilneas is still recovering from a civil war, the curse has returned with renewed fervor. To compound the worgen threat, the Forsaken are battering at the nation’s gates in a bid to conquer Gilneas. Unbeknownst to many of the kingdom’s citizens, a war between beast and man is also raging within the worgen themselves. Whether or not balance can be restored to these cursed Gilneans before the entirety of Genn’s kingdom loses its humanity is uncertain.

For many years, the nation of Gilneas existed in isolation behind the colossal Greymane Wall. Free from outside influence, the kingdom relied on the indomitable spirit and tenacity of its citizens to make its own destiny in the world. Of late, however, a series of events has shaken Gilneas to its core. While the nation struggles to recover from a past civil war, a devastating worgen curse has spread throughout Gilneas, turning some of its inhabitants into ferocious beasts.

Recently these savage worgen have launched a surprise assault against the kingdom’s fortified capital, Gilneas City. The uninfected citizenry have taken up arms in defense of their home and are now battling the worgen throughout the city’s winding cobblestone streets and narrow alleyways. Yet with no signs of relenting, the worgen threat has raised fears that perhaps the days of Gilneas surviving on its own have come to an end.

Due to their ties with the wilds, worgen are able to call upon their bestial fervor to travel great distances. With the aid of all four limbs, a worgen can sprint at speeds rivaling the swiftest horses, nightsabers, and mechanostriders. As though it satisfies some primal urge deep within, worgen relish this mode of travel over those used by Azeroth’s other races, who rely on mounts to transport them.

Time and again, King Genn Greymane has been forced to make difficult decisions to sustain Gilneas’s well-being and autonomy. Following the Second War, he ordered the construction of the seemingly impenetrable Greymane Wall to protect his people from outside threats, effectively closing off the nation from the world and its petty conflicts. For years the wall did as intended, but when the worgen curse spread into Gilneas, the enormous barrier began to resemble the gateway to a prison rather than a sanctuary. Now, with Forsaken in nearby Silverpine Forest and the worgen curse poised to destroy everything that Genn and his forebears had labored to build, Gilneas’s proud king must do everything in his power to save his kingdom. Due to his anger over the dire situation, however, Genn’s most arduous trial ahead might be subduing his own fury before it consumes him entirely.