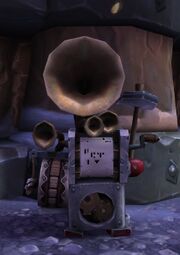 The Garrison Jukebox, known as the

Tune-O-Tron 5000, is a feature added in patch 6.1, that allows players to change the music that plays in their Garrison.

Unlock the jukebox by completing

[100] Bringing the Bass, which requires gathering five items from all over Draenor. After gathering the five items, the jukebox is built and players are handed seven music rolls. Interact with the jukebox to have it play the requested song instead of the default garrison music while at the garrison.

For the sophisticated character who cannot stand silence while out and about, a

[Portable Audiophone] toy is awarded for completing the

Completing the initial quest rewards the

Many other rolls are found all over Azeroth, Draenor, and Outland.

The quest-giver next to the jukebox also gives some (faction-appropriate) hints.