Not to be confused with Gazrix. 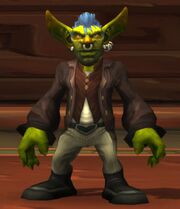 Gazrix Gearlock is a goblin found in the Town Hall in Stormshield.

) off shore of the Spires of Arak, leaving a written explanation that it was so the local orcs couldn't accidentally find it. On the final buoy far off shore, Gazrix's accompanying note revealed that the Cartel knew of Nuggle's deception and had dumped the payment to the bottom of the ocean as punishment. Apparently not [an engineer], the foolish Nuggle died trying to get to it.

Gazrix learned from sources in Dalaran that an adventurer had a run in with the Sixtrigger brothers Rax and Snaggle. Having apparently also run afoul of the Cartel, Gazrix arrived at the city with Bruiser Toppleblade and Bruiser Wrenchvolt and waited for an opportunity to call the adventurer over outside the Bank of Dalaran.

Gazrix proposed a two-birds-with-one-stone situation: if he handed over the Cartel's current information on the Sixtriggers' location in Stormheim, perhaps the adventurer could gather a group together and make sure the Sixtriggers have an "unfortunate accident." Gazrix also made sure to note that as far as anyone knew, the adventurer and he had never spoken to each other.

They won't let us in to the city proper, but I have a feeling that could all change real soon.

I wouldn't worry about them. I've wheeled and dealed with trade princes, this will be a piece of cake.