For the items called "gems" before The Burning Crusade, see raw gem.

A gem is generally an item that can be used as an ingredient primarily for jewelcrafting recipes or placed into a socket of another item to give that item additional bonuses, powers and/or procs. Jewelcrafters can turn raw gems into socket gems or various jewelry items like rings and necklaces. The term "gem" can be used for raw or cut stones, but is often only used to describe cut gems. A gem cannot be removed once it is placed into a socket, however it can be overwritten by another, destroying it in the process.

Colored gems are the most common type of socketable gem. They come in the colors red, blue, yellow, green, purple, and orange. They provide stat bonuses when socketed. They can be placed in any colored socket, or a prismatic socket. They will activate an item's socket bonus if the correct color gems are matched up with the socket colors. A certain number of certain colored gems may be required in order to activate meta gem.

The primary colored gems are red, yellow, and blue. Each color is associated with a specific set of stats, as in the following table:

The green, purple, and orange gems are considered hybrids. Each of these gems offers a combination of two stats according to the parent colors. For example, a purple gem may provide bonuses to expertise (a "red" stat) and hit rating (a "blue" stat). All of the colored gems of a particular tier have the same benefit weighting. A hybrid gem's two bonuses will each be half what the primary gem would have provided. For example, the

[Solid Ocean Sapphire], a blue gem, provides +60 stamina, and the

[Flashing Inferno Ruby], an red gem, provides +40 parry. The hybrid of these two is the purple 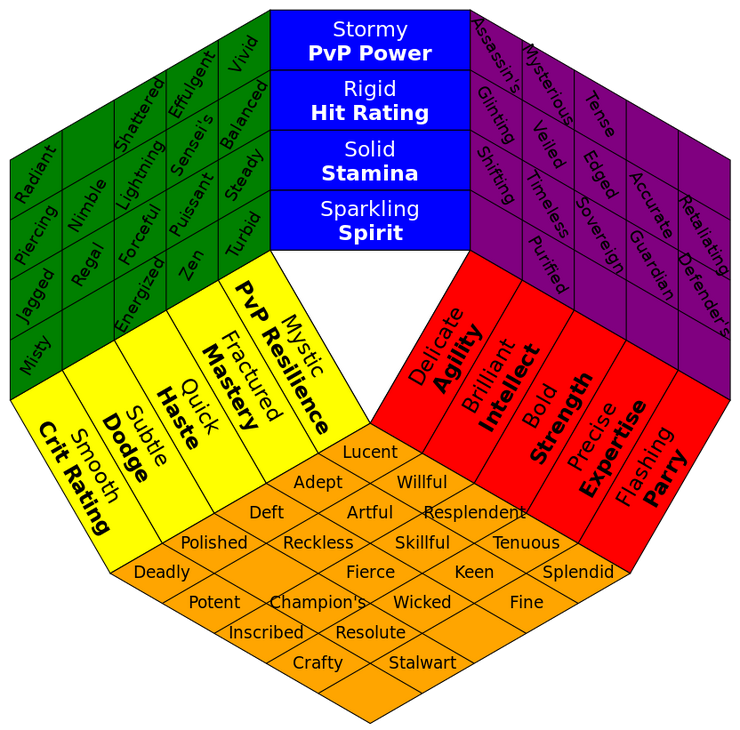 The Burning Crusade and Wrath of the Lich King expansions introduced prismatic gems, but there are not as yet any prismatic gems associated with Cataclysm.

Meta gems are more powerful gems that can only go in a meta socket. Meta sockets are found only on powerful headgear, and there is only one socket per piece. Meta gems may require some colored gems to be equipped in order to be activated; for example, a meta gem may require you to equip items that have two blue and one red colored gems socketed.

Cogwheel gems fit into cogwheel sockets, which are found on the Bio-Optic Killshades epic engineering-crafted goggles. When first manufactured, these goggles have very poor stats, but the cogwheel gems are quite powerful in order to compensate. This allows the engineer to customize the goggles for any class specialization. It allows the goggles to be used by any class without the need for a large number of goggle schematics.

Tinker's Gear gems are the Mists of Pandaria upgrade to Cogwheels and are no longer engineer-only as non-engineers can now equip some items that have cogwheel sockets.

Sha-Touched gems fit into Sha-Touched sockets, which are only found on weapons from Grand Empress Shek'zeer in Heart of Fear and Sha of Fear in Terrace of Endless Spring.

Gem bonuses are activated when they are placed in equipment sockets and the equipment is worn. To begin socketing an item, hold down shift and right-click the item. A dialogue window will open which allows the gems to be placed in the sockets.

Gems cannot be removed from sockets once finally placed. However, they can be replaced by placing new gems in the same socket. The old gem will be destroyed once the new gem's socketing is finalized.

These pages concern the gems new to Cataclysm.

These pages concern the gems new to

Wrath of the Lich King.

Northrend epic gems can be purchased with 220

[Justice Points] from vendors in Dalaran:

These pages concern the gems specific to the