Genavie Callow is a level 32 quest giver located at Galen's Fall, in the Arathi Highlands. 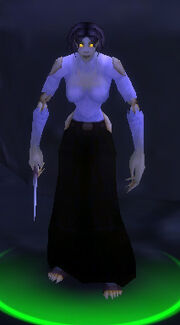 Genavie Callow in her previous location

Genavie Callow was living in Arathi Highlands before the plague.[citation needed]  Her entire family was killed by the plague and her family's estate was burned down and looted. Things important to her (whether if it's an object or not is not clear) were stolen from her by Kenata Dabyrie. Like a typical Forsaken, she has only one thing on her mind: revenge. She asks you to go kill the Dabyrie (Kenata, Marcel and Fardel) and bring her back their heads as proof.

Before the Cataclysm, Genavie Callow was located in the Trade Quarter in the Forsaken's Undercity.

She may be related to Lady Callow.