Not to be confused with Greatmother Geyah.

Overlord Geya'rah is the daughter of Durotan and Draka from the alternate Draenor. She served as Warchief Grommash Hellscream's second-in-command during the War between the Lightbound and the Mag'har. She now leads the Mag'har orcs who managed to escape from Draenor, and pledged her people's loyalty to Sylvanas Windrunner and the Horde.

Unlike most leaders, Geya'rah supported the increasingly hostile actions of Sylvanas Windrunner during the Fourth War. This led to her standing as a loyalist when the Horde rose up in rebellion against her, though she would ultimately come to regret this decision after Sylvanas abandoned the Horde. Quickly shifting her allegiances, Geya'rah admitted her mistake. As such, Geya'rah retained her position and was later seated on the Horde Council as the Mag'har orc representative.

As a child, draenei scholars taught Geya'rah to read and write.[2]

Following the Frostwolf Orcs joining with the Mag'har orc clans, Geya'rah would eventually rise to the rank of Overlord and serve as Warchief Grommash Hellscream's second-in-command during the war between the Lightbound and the Mag'har. As the Mag'har and Lightbound clashed, events on Azeroth would see to a new war between the Horde and the Alliance. In the midst of this, Eitrigg sought to travel to the alternate Draenor and call upon the debt the Mag'har owed to the Horde for liberating them from Garrosh Hellscream's meddling and the Burning Legion's corruption.[3]

Geya'rah would later encounter Eitrigg and a Horde champion after they had been taken prisoner under suspicion of being Lightbound spies.[4] During her interrogation, Warchief Hellscream arrived and recognized the two as coming from Azeroth. After hearing Eitrigg's request for aid, Geya'rah objected on the grounds that the Mag'har couldn't pledge soldiers to aid the Horde when they faced enemies of their own. Believing that having a common foe would sooth Geya'rah's wariness, Warchief Hellscream requested that the two Horde emissaries assisted Geya'rah in putting down an ogre uprising led by Kor'gall, Greatson of Kor'gall. After slaying the traitorous ogre Geya'rah would inform Eitrigg and the Horde champion about the threat of the Lightbound.[5]

After receiving word that Beastwatch was under attack by the Lightbound, Geya'rah rushed to its defense. With Beastwatch secured Warchief Hellscream and Overlord Geya'rah were approached by Lantresor of the Blade and informed that the entire Lightbound army were spotted heading towards them. While Lantresor gathered every orc he could to Beastwatch, Geya'rah held the line with her Warchief. During the battle, High Exarch Yrel herself appeared on the battlefield and offered the Mag'har one last chance to embrace the light. As Warchief Hellscream and Lantresor charged against the Lightbound, Eitrigg activated the shard of the

[Vision of Time] in his possession in order to return to Azeroth. Though wishing to her follow her Warchief in battle, Overlord Geya'rah followed his last order to lead the Mag'har to Azeroth.[6]

Believing that there was no time to mourn what was lost, the Overlord declared that the Mag'har would make a new home in Azeroth. To this end, Overlord Geya'rah pledged her people's loyalty to Warchief Sylvanas Windrunner and the Horde.[7] After the Mag'har made a new home for themselves in Hall of the Brave within the Valley of Honor of Orgrimmar, Geya'rah would remark to Mag'har adventurers that the Mag'har face a new future and that they had to make their mark upon the land. To this end, she sent them to meet with Ambassador Blackguard at the Orgrimmar Embassy and then to go forth and claim victorious across Azeroth.[8] After said adventurers proved themselves to the Horde, a pleased Geya'rah honored them with a symbol of their proud lineage.[9]

Geya'rah joined the other leaders of the Horde in attending Talanji's coronation.[10]

When Baine was arrested and Zelling was killed for their parts in freeing Derek Proudmoore from Horde captivity, Geya'rah believed that Sylvanas showed strength by punishing Baine for deceiving and betraying her, and is one of only two Horde leaders to voice support for her decision (the other being Gallywix).

Overlord Geya'rah, along with Jastor Gallywix, were the only two leaders to stay loyal to Sylvanas. Under Sylvanas's command Geya'rah armed her forces for battle against their enemies, which caused the Overlord to remark that the Mag'har always stood ready to crush the bones of their enemies.[11] During the conflict, Varok Saurfang challenged Sylvanas to a Mak'gora, which ended in his death and Sylvanas's abandonment of the Horde. In light of Sylvanas's betrayal, many of her former loyalists bent the knee to Saurfang's revolutionaries, Overlord Geya'rah among them. Overlord Geya'rah subsequently attended Saurfang's funeral.[12] She remarked that while Sylvanas was a strong warchief she was not a true warchief because everything she did was for herself - whereas Saurfang sacrificed everything he had for the Horde. She then vowed to remember that a true warchief must have both strength and honor.

Sometime later, Overlord Geya'rah had taken to leading marches throughout the city, warning the Mag'har to be on the lookout for Sylvanas's loyalists. She called for them to remember that while Sylvanas was a strong warchief she only fought for herself, not for the Horde. She declared to her troops that a great leader must have more than strength, that they must be true to their people, and live and die for them. She ordered them to not forget this and that they must not repeat Sylvanas's mistakes. Should she encounter Thrall during one her marches, the Overlord will greet him by birth name Go'el.

Geya'rah on the Horde Council.

A version of Overlord Geya'rah appears in the Vision of Orgrimmar. In it, she and her Mag'har refused to drink the blood of N'Zoth which resulted in the destruction of the Mag'har. As the only survivor, she has vowed to fight against the corrupted Horde.

In the aftermath of N'Zoth's death and the end of the Fourth War, Geya'rah and the other Horde leaders received the terms for an armistice from the Grand Alliance, putting the Fourth War on hold indefinitely, if not permanently. With that matter settled, Lor'themar Theron addressed the absence of a Warchief. Despite support for Thrall to take the mantle on again, he refused, citing that he had promised Varok Saurfang he would not take on the role once more. Instead, he brought up the idea of the Warchief being necessary, instead bringing in the belief that a change was needed for the Horde's leadership. With this, the Horde Council was created, with Geya'rah representing the Mag'har orc clans. In a conversation with Lilian Voss, Geya'rah admitted that the Mag'har had never known life without a Warchief, and this sudden change would be rather difficult for them. In light of Voss representing the Forsaken on the council, Geya'rah inquired if Voss was the future queen they sought. However, she was informed that while Voss would speak on her people's behalf, she would not rule as Voss felt that there was another more suited to the task.[13]

Geya'rah later vowed that the Mag'har stand with the Horde, whether at peace or at war.

In light of Queen Talanji's call for the Horde to respond to the Zandalari wounds during a Horde Council meeting, the Mag'har voted in her favor. While not directly mentioned, it is assumed that as their leader and representative, Overlord Geya'rah was present due to the implication that Lilian Voss was the only missing council member for most of said meeting.[14] She was not present at the meeting when Zekhan was sent to Zuldazar nor at the congregation that ended in favor of Thrall and Ji Firepaw meeting with Jaina Proudmoore and Anduin Wrynn, suggesting that she, like Rokhan, was out of the city at the time of the meeting. 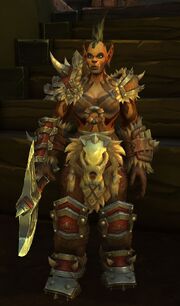 Then the naaru came, and fanaticism took hold.
The draenei were reborn--no, they have a different word for it--re-forged in their precious Light.
Their belief blinds them, binds them to masters who seek to control the universe as surely as the Legion did.
Draenei... eredar... so willing to bend the knee. So prone to corruption.

Ancestors, may this dream come true!

Geya'rah narrows her eyes.>
Not for long.

That alone is reason to crush their cities to dust.

Orgrimmar patrol
Main article: Battle at the Gates of Orgrimmar#Thrall and Geya'rah

The Mag'har stand with the Horde, whether we are at peace or at war.