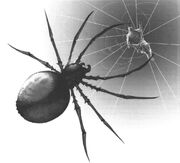 A giant spider ready to kill her prey.

A giant spider is a spider of staggering size — perhaps 15 feet around — with great furred body.

Many horror stories in Mulgore begin and end with one of these terrifying beasts. Giant spiders are 15 feet in diameter, these huge relatives of the brown wolf spider roam large territories, feeding on livestock and herds before moving on to fresh hunting grounds. A giant spider will establish a large nest, sleeping and digesting meals there, then abandon it when the local area becomes unfavorable.

Giant spiders lie in wait, sometimes building piles of loose materials to cover them. Once a victim comes within reach, they pounce, biting several times and then backing off. Unlike other large spiders, giant spiders will rip bits of flesh free, storing them in something like cheek pouches for digestion. Prey is wrapped in a thin sheet of webbing mainly to make it easier to transport them back to the spider's lair.[1]

A model, first introduced with Maexxna, exists using the name GiantSpider. This name may or may not represent this particular spider type, instead they may just be a model update for a more intimating spider look for a one-time boss, which later received more skins to be used in later expansions.