The Gilnean Royal Guard[1] is a force of elite human and worgen soldiers dedicated to the service and protection of the monarch of the kingdom of Gilneas and the Gilnean royal family (the Greymane).

The force has been present during many of Gilneas's darkest times, such as the infamous Northgate Rebellion, where they formed a portion of the royalist forces attempting to crush the revolt. In more recent times, the Guard has played a role in such conflicts as the outbreak of the Worgen curse, the invasion of Gilneas by the Forsaken, and even the Burning Legion's third invasion, where they have fought against the demons alongside their king.

Serving the current King of Gilneas, Genn Greymane, many members of the Royal Guard have subsequently become worgen themselves (along with much of the Gilnean population).

With the onset of the Third War, tensions began to rise within the kingdom of Gilneas as a result of King Genn Greymane's controversial isolationist policies.[2] When the notorious Greymane Wall was eventually completed, it pushed many into open rebellion against the monarchy. Led the nobleman Lord Darius Crowley, rebel forces clashed with those loyal to House Greymane in the streets of Gilneas City and beyond. At such a moment of unrest in the kingdom, the Gilnean Royal Guard are presumed to have been extremely active in the protection of the royal family and the prosecution of the war.

After a bloody civil war that tore much of Gilneas apart, King Greymane, the Royal Guard, and other loyalist forces emerged victorious over Lord Darius and his rebels. While the Northgate Rebellion was decisively crushed, it left the kingdom of Gilneas in a desperately weakened state.

As worgen—victims of the worgen curse—began to grow in number within Gilneas, the situation grew more dire. Eventually, entire packs of worgen attacked Gilneas City itself, overwhelming many of its defenses and throwing the city into chaos. The Gilnean Royal Guard were deployed to Gilneas's streets, accompanying King Greymane, and fought to drive the wolf-men from the city. Although Darius Crowley and other Northgate rebels were released under the King's orders, joining the fight, the worgen onslaught proved relentless. Only through a last stand by Crowley and some others were the royal family and guard, as well as many civilians, able to escape.

Having fled to Duskhaven, the Gilneans soon discovered the imminent invasion of the Forsaken, who had begun to arrive with a large fleet on Gilneas's shores. At this time and during the conflict against the Forsaken to come, any of the remaining Royal Guard are presumed to have stayed with King Greymane or other members of the royal family. It is unclear how many remained at this stage, and whether they played a role in the coming battle for Gilneas City against Forsaken forces. In the wake of this conflict, the majority of Gilneans in the kingdom began to leave with the aid of their new night elven allies.

The King and remaining members of the royal family (Prince Liam Greymane having been slain in the fighting) departed for Darnassus, before eventually reaching Stormwind City. It is likely that the Royal Guard accompanied them. 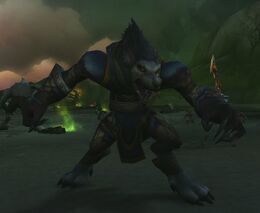 The Battle for the Broken Shore became the first engagement of the Burning Legion's third invasion, as large armies of the Alliance and Horde assaulted the demons' position on the Broken Shore, off the south coast of the Broken Isles. Alliance forces were led in the battle by both the King of Stormwind, Varian Wrynn, and King Genn Greymane of Gilneas, among others. Gilnean worgen troops also formed a large portion of the Alliance attack force, and when King Greymane led a charge onto the Broken Shore in person, he was accompanied by a contingent of the Gilnean Royal Guard, now worgen themselves reflecting both the transformation of their king, and many other Gilneans.

The Battle for the Broken Shore ultimately proved disastrous, however, with Alliance and Horde forces having to retreat from the area. King Greymane himself, along with his Royal Guard and others, were only barely able to escape aboard the Skyfire gunship thanks to the sacrifice of King Varian. Returning to Stormwind City, Genn Greymane began to rally his forces, namely the Gilneas Brigade, in preparation for another attack on the Broken Isles. The Captured Warriors were members of the Royal Guard captured by the demons. 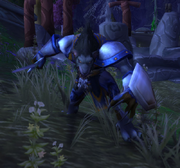 The Royal Guard in Darkshore

Standard royal guards do still appear, however, protecting Tess Greymane as she aids the Kaldorei in Darkshore. Tess later promotes a worgen hero to a member of the Greyguard at the end of the worgen heritage armor quest chain, in thanks for their help.[3] 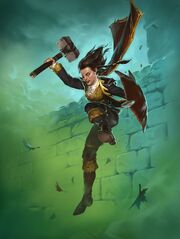 A Gilnean Royal Guard in Hearthstone

In most of their appearances, the royal guards wear the same armor as the majority of the Gilnean guards, such as the Gilneas City Guards or Gilnean Guards. Their appearance in Darkshore has them wearing the Stormwind footman set, while Greyguards wear a unique set of unobtainable armor.

Lieutenant Walden, the Wounded Guards and Slain Guards might be members of the Royal Guard or the Gilneas City Guards.