For the regular item version, see

[The Glaive of Vol'jin]. For the bloodied item version, see

[The Bloodied Glaive of Vol'jin]. For the ship, see Vol'jin's Glaive. 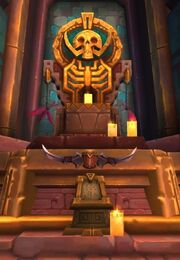 A shrine in Dazar'alor with the Glaive of Vol'jin and a plaque.

The Glaive of Vol'jin on the Echo Isles.

The Bloodied Glaive of Vol'jin in Dazar'alor close-up.

The Glaive of Vol'jin is a warglaive that belonged to the deceased Warchief of the Horde, Vol'jin. From the Darkspear Rebellion forward, it was Vol'jin's favored weapon. 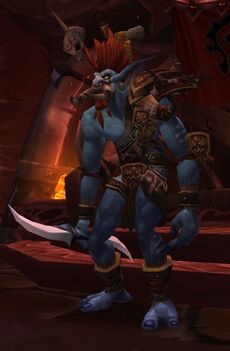 Vol'jin wielding his glaive during his time as Warchief.

During Vol'jin's time recovering from Garrosh Hellscream's assassination attempt at Shado-Pan Monastery, he was sent a vision by the loa warning him of the Zandalari Invaders that were sailing from the Isle of Thunder to attack Zouchin Village and secure a landing zone. During the preparations to blunt the invasion and evacuate the villagers, Chen Stormstout had the Shado-pan create a weapon to replace the one Vol'jin lost. Chen directed their swordsmiths to knock the grips off two of their curved swords, then Brother Xiao riveted the tangs together and wrapped them in shark's skin over bamboo. After it was completed, Chen proudly presented it to Vol'jin after the troll had been outfitted with armor. When snapped still, the blades curiously quivered and hummed. Though it wasn't his glaive, the balance matched favorably, and he commented that Xiao had done well.[1]

A short while earlier, Chen had shared (with Lord Taran Zhu's permission) a test brew that left the drinker with a feeling of freedom, mainly linked with a past memory of the emotion. Vol'jin recalled the emotion as the peace one knows when crushing one's enemies, their dreams dying with them and leaving one's future clear like the morning after the rain, the crisp snapping of their bones, and their dying sighs of a quick death. As Brother Xiao was one of the few chosen by Taran Zhu to partake, Chen told him to make a weapon that was what Vol'jin remembered from the brew.[2]

Vol'jin would most often be seen wielding the weapon from the time of the Darkspear Rebellion forward.

Following the Battle for the Broken Shore and Vol'jin's death, the glaive was hung with his other weapons and mask in a place of honor on the wall within Grommash Hold.[3]

The glaive would eventually be put on display at a hut in the Echo Isles. After Zalazane escaped Bwonsamdi's grasp,[4] Master Gadrin requested that the Horde Speaker retrieve the glaive in order to use it's power to end Zalazane.[5] They were successful, Zalazane not believing that Vol'jin' could have such power.[6]

Princess Talanji then suggested that Vol'jin's remains (including his urn and glaive), be taken to Atal'Dazar to rest alongside the other great troll leaders of the past.[7] After discovering that his spirit no longer rested in the urn, Gadrin led a seance to contact the former warchief. Vol'jin's spirit responded, claiming that the Shadowlands were in turmoil due to G'huun and instructed the adventurer to use his glaive to finish off the old god, once and for all.[8] Now the Bloodied Glaive of Vol'jin, Vol'jin's spirit, the adventurer, and Talanji proudly displayed it for all of Zuldazar to see, using it as proof of both Talanji's ability to lead the Zandalari to victory and how much the Horde has aided the Zandalari Empire.[9] The glaive was then put on a plaque and displayed near the shrines of the loa on Dazar'alor.

The Bloodied Glaive of Vol'jin

Behold the Glaive of Vol'jin, son of Sen'jin, Warchief of the Horde, Chieftain of the Darkspear tribe, Shadow Hunter, and the troll who showed Zandalar what it meant to stand with family over empire.

This blade has tasted the flesh of G'huun, and is a symbol of the power the Zandalari can achieve when they ally with the Horde, instead of trying to conquer it.