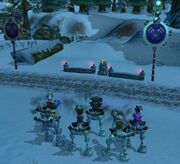 Gnome Citizens were involved in the following quest of the Operation: Gnomeregan quest chain:

[80] A Few Good Gnomes, the player uses the [Motivate-a-Tron] to convince them to join the army taking back Gnomeregan.

Using the Motivate-a-Tron on a Gnome Citizen results in that citizen becoming motivated (renamed, or replaced with "Motivated Citizen") and following you for up to 15 minutes. If you mount up, they mount up (on Mechanostriders) and will keep up with you, regardless of if you are using an epic or a regular land mount.