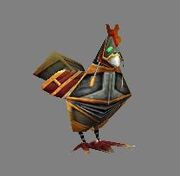 The Gnomish Battle Chicken is a trinket that Engineers can create and use with a skill of 230 or higher. The chicken's level is based on your engineering skill divided by 5 (starts as level 46 at 230, scaling up to level 75 at 375 engineering and to level 90 at 450 engineering.).

After it is equipped, there is a 30-second delay before it can be used. When activated, it summons a Battle Chicken guardian pet that fights for the summoner until either it is killed in battle or 1.5 minutes have passed. The trinket isn't consumed in either case, but there is a 20 minute cooldown before the trinket may be used again.

This item is created with Gnome Engineering (230); taught by trainers.

The gnomish battle chicken is an oversized mechanical chicken. It may look silly, but it is one tough customer. Starting an inert battle chicken involves cranking cranks, pushing buttons, turning little knobs, and speaking into flared tubes. Once started the chicken obeys the voice commands of the individual who started it, attacking his enemies and doing anything else he asks. The chicken only understands simple commands.[1]

Tactically, a Battle Chicken would be good to use in any fight where the Battle Squawk buff would be helpful and where the Chicken would have a good chance of surviving to Squawk. If you're a Rogue or are grouped with one or more, an attack speed buff is especially powerful; the same is true of Warriors. It's unlikely that a mob would aggro on the Chicken, as it doesn't do much damage itself, but against mobs with AoE attacks or mobs that randomly pick an enemy and charge at it, the Chicken will probably die before it Squawks. So use the Chicken if you're grouped with melee combat types, but don't bother if you're going up against mobs with AoE attacks or bosses that randomly charge (unless you're using the Chicken as a red cape to decrease the chances that the boss will charge a party member).

It sometimes casts a self-buff, Chicken Frenzy, which increases it's attack speed and damage dealt by 100%.