Wowpedia
Register
Don't have an account?
Sign In
Advertisement
in: Articles to clean up, Technology, Goblins,
and 5 more

For the Warcraft and Hearthstone comic, see Goblins vs Gnomes. 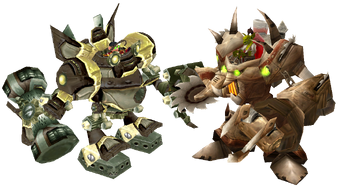 Goblins and gnomes have long had an intense rivalry. This competition has fostered a number of inventions designed specifically to show up the opposition. Nowhere is this better seen than at the racetrack in the Shimmering Flats, where the two sides rush endlessly to develop new racing vehicles — ones with little practical use anywhere else in the world.[1] Gnomes and goblins have always been rivals — though whether this rivalry is friendly or brutal depends on the individuals involved.[2]

Goblins don't have a tremendous number of truly skilled engineers, primarily because they tend to blow themselves up. It’s said that there are old goblins and there are goblin tinkers, but there are no old goblin tinkers. While not one hundred percent accurate, there is truth to this adage. Many goblin inventions are bizarre, or have no apparent use. A goblin often creates things just to see what happens, then discards his creation when he can't think of a way to make money with it. Some of the most well-known devices in the world came from the trash heaps of goblin inventors who didn’t know they had something anybody would have wanted.[3]

Goblins were once brilliant inventors, but no longer. They once were the definitive name in technology long ago, but now their machines barely run. This doesn't stop the race from playing with technology, however, and goblins run the market in destructive weaponry. They try desperately to maintain their amazing devices, but they’re no longer clever enough to carry out the maintenance properly. They now rely on improvisations and jury-rigs that work only haphazardly. Thus, when a goblin creates, the process might appear to be one part ingenuity and five parts desperate improvisation. Most goblin items look suicidal to use, and rarely work correctly.[4]

Goblin technology tends to be radical and dangerous, always pushing the ragged edge of feasibility. Goblins have short attention spans as a rule, so if they can’t get something to work right away, they either give up or move on to something else that attracts their attention. Goblin workshops are littered with half-finished projects and the scavenged remnants of inventions that didn’t pan out. While this attitude gives them more time to work on new and promising creations, who knows how many potentially valuable projects have been left gathering dust in some back corner?[1]

Goblins share the gift of technology with gnomes, yet they have a much more sinister and devious method of putting technology to use. Goblins revel in the destructive power of their devices, and their lack of discipline often manifests in unreliability in the field. A goblin inventor is more likely to die using one of his own devices than he is to be killed on the field of war. Notorious for malfunctioning in catastrophic displays of explosive power, goblin technology is better left to those who need a big payoff with substantial risk. The goblin race’s independence makes them a reckless force, with little restraint as to what they are willing to build or create. Luckily goblins have little discipline for research and development unless it produces wealth, and most if not all of the grander experiments they begin are aborted due to sudden interest in another branch of technological development.[5]

In contrast, gnomes overplan new projects, producing blueprints and schematics that can take longer to make than the device itself. While this cautious attitude results in higher quality products and a greater success rate, it often takes so long that cost overruns creep in. While a goblin would scream and flee at the mere thought of a cost overrun, a gnome simply shrugs and presses on. If a project fails to work correctly the first time, a gnome will continue to tinker with it, while a goblin would usually give up and move to something else. Thus, gnomish items have very low failure rates compared to goblin items.[1]

Gnomes tend to design fairly complicated devices that are relatively safe.[6] Gnomes are in many ways commensurate organizers: a gnome can spend as much time (or more) organizing and planning a project as he/she does actually working on it. If the design fails, he/she tries to learn why, and fixes it if he/she can. If he/she meets with success, he/she as often as not continues to tinker with and improve the design, often for years afterward. Thus, many gnomish designs feature a high degree of complexity and a low chance of failure, the exceptions being those that dabble with chaos energy — but even then, they take steps to ensure the worst that could happen is a brief, non-fatal failure.[7]

Gnomes are innovative thinkers and are responsible for a vast variety of inventions, including more than a few that are commonly attributed to dwarves. Although a diminutive people, gnomes think big, often producing designs far too complex to ever be realized. To gnomes, technology is a way of life. Even gnomes who take on other trades often tinker in their spare time. Because of their innate curiosity, they produce a wide variety of devices that are interesting or amusing but otherwise useless or impractical. While others might shake their heads at such folly, the gnomes value all invention, no matter how unimportant it might seem. Among the well-known gnomish devices are the world enlarger, net-o-matic projector and harm prevention belt.[8]

Both sides scoff at the other as taking the “wrong” attitude towards engineering. Goblins laugh at the way gnomes spend far more time and money on a project than they’ll ever hope to recoup, while the gnomes shake their heads at the way goblins are always blowing themselves and their laboratories to pieces. Still, both sides have their advantages and disadvantages, so neither can be said to be the right way to do things. Some tinkers choose to study the ways of gnomish or goblin engineering in more detail, becoming specialists in that race’s way of thinking and designing technological items.[1]

Someone may not need to be a goblin or gnome to specialize in that race’s engineering methodology. In fact, it’s not unheard of for a goblin to give up on his dangerous ways and embrace gnomish engineering, or vice versa. So far, the goblin/gnome rivalry has yet to erupt into fighting, but the possibility exists, especially given the resurging presence of goblins within the Horde. Such a technology war would have consequences undreamt of.[1]

The gnomish inventors are highly adept at creating outlandishly clever contraptions for military use. Among the many bizarre inventions created by the gnomes are the flying machines that hover high above both land and sea, as well as the implausible submarine that can move under the seas. The gnomes are also responsible for perfecting the technique of extracting various chemical compounds out of oil to make gunpowder and explosives. Although the gnomes are a bit odd and eccentric, none can deny their value to the Alliance.[9]