Not to be confused with Golden Road.

The Gold Road runs north-south from Mor'shan Rampart to the Great Divide. Prior to the Cataclysm the road continued south, to a bridge connecting the northern and southern half of the Barrens. South of the bridge, the road was called the Southern Gold Road. 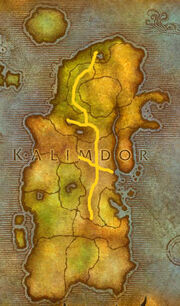 The following details traveling the Gold Road prior to the Cataclysm:

It was an ancient highway that ran the breadth of Kalimdor a millennium ago.[1]

This trade route is named for the trade caravans that travel regularly along the highway from Ratchet in the south all the way to Nighthaven in the north.[2]