Echo Ridge Mine in Elwynn Forest.

Gold mines are outcroppings of rock where gold ore can be found and collected. In Warcraft I, Warcraft II, and Warcraft III, they are neutral buildings where worker units can gather gold inside of them. The harvested gold is then (in addition to lumber) used as a "currency" to build buildings, train units, and purchase items or upgrades for heroes. As such, gold mines are extremely important to achieve victory.

Main article: Gold Mine (Warcraft I)

A gold mine during the First War.

King Llane had sent many a surveyor into the hills and mountains throughout the kingdom in search of new deposits of gold. One could discover one of these sites, and find that there were still veins of the precious metal to be mined. Peasants could be trained in the skills required to mine and deliver this gold to a Town Hall for disbursement.[1]

Some rock faces held deposits of gold. One would recognize them because Blackhand had sent searchers out, and any that were located would have an entry way clearly marked. Peons would mine these holes and deliver the gold to a Town Hall for disbursement.[2]

A gold mine during the Second War.

Mined from the rich earth of Azeroth and Lordaeron, this precious metal was commonly used in exchange for goods and services. As a rare substance that was always in short supply, Gold had to be dug out from the rock and soil within established Gold Mines. Many of these Mines were abandoned when the Orc raids began and the workers fled for their very lives. Since the beginning of the War, these sites were frequently operated while under the protection of military forces.[3] 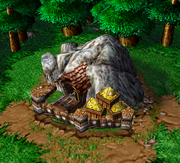 A gold mine during the Third War.

Mined from the rich earth of Azeroth and Lordaeron, this precious metal is commonly used in exchange for goods and services. As a rare substance that is always in short supply, Gold must be dug out from the rock and soil within the established Gold Mines. Many of these Mines were abandoned when the Orc raids began and the workers fled for their lives. Since the beginning of the War, these sites have frequently been operated while under the protection of military forces.

A massive gold mine could be found in the dungeons and caverns beneath the Darkspear Islands, inhabited by gnolls led by a miser.[4] The Stonetalon Peak caverns also had two gold mines, led by kobolds.[5] The kobolds had another gold mine in Dustwallow Marsh.[6]

Gold was scarce even in the height of the Alliance's power.[7]

The RPG describes several mines that are not canon anymore, for example Opal Ridge and Goldcrease Mine.

Mines can be found all throughout Azeroth, Outland and Draenor, and even in battlegrounds such as Arathi Basin. While a few mines have been abandoned retaking them is often an important objective for the local factions.

Many sites in World of Warcraft are not true gold mines and are used to mine other ore veins instead such as Saronite or gems.

Mines in the Great Sea and South Seas