Goldshire is the second human town that most human characters visit during their adventures, sometime after level five. Goldshire is centrally located just southwest of Northshire and has most low level class trainers and some profession trainers. Besides a blacksmith it has the first Inn that most human characters will encounter — the Lion's Pride Inn.

Goldshire has roads that lead to Stormwind City to the northwest, Northshire Abbey to the northeast, Westfall to the west, and Lakeshire (Redridge Mountains zone) to the east. Its prime location makes it an important trade town. Travelers, merchants, adventurers, Stormwind guards, and priests from the abbey all stop and make regular visits to the town on their way to and from Stormwind, usually enjoying the hospitality of the Lion's Pride Inn, one of the most respectable ale houses in Azeroth.

Marshal Dughan patrols Goldshire for any threats. Many refugees from Westfall move to Goldshire and Elwynn Forest in an attempt to escape the Defias Brotherhood. It is considered a village by Stormwind standards.

Just south of Goldshire are located the Fargodeep Mine, The Maclure Vineyards, and The Stonefield Farm. To the east is Crystal Lake.

Goldshire, along with Moonbrook, was taken in preparation of the Horde's sack of Stormwind Keep during the First War. The goal of the orc Warchief was to sever the lifeline between King Llane and his people.[3]

After the Second War, Goldshire and the rest of the kingdom of Stormwind begin its reconstruction.

Unit Goldshire was sent to the Howling Fjord.

The former Kirin Tor mage Karlain and his son Mardigan lived in the village. Shortly before the Cataclysm, a visitor was murdered in Lion's Pride Inn. Mardigan was held responsible for his death even though he just found his body.[4]

A flight path has been added to the town.[5] A Profession Trainer and a Hunter Trainer have also been added.

Several peasants left Goldshire and arrived to Krasarang Wilds on Pandaria as part of the Operation: Shieldwall.

During Death Rising, troops of the Argent Crusade were mobilized under the orders of Crusader Lenna in order to protect the town and its inhabitants. The situation being rather calm, the crusaders remained vigilant and Crusader Lenna announced to the adventurers who came to help them that their patrols reported outbreaks of Scourge activity to the east, leading her to send a a scout to speak with Guard Captain Josephine in the Redridge Mountains. She also transmitted a report to Commander Gregor in Stormwind City to brief them on the situation in the region.[6]

At House near Crystal Lake:

At the house near Crystal Lake:

Trainers in and around Goldshire

The Defias Brotherhood have camps throughout Elwynn Forest, especially to the south and east of Goldshire, which they use as staging grounds for raids on the local farmers and merchants. They have also taken over a number of homes and farmsteads, including the Brackwell Pumpkin Patch and Jerod's Landing, where they smuggle contraband from Redridge to Westfall. Some of the more notorious thieves in the region include Dead-Tooth Jack, Morgan the Collector, Erlan Drudgemoor and Surena Caledon. There are rumors the Defias have a relationship with the kobolds in Elwynn Forest, enlisting them to collect gold from the mines. They may even be associated with the Riverpaw gnolls along the border of Westfall. The Westbrook Garrison frequently sends out patrols to search for thieves entering Elwynn Forest from Westfall.

A significant number of gnolls have set up camps along the western borders of Elwynn Forest, led by their chieftain, Hogger. While currently held back by the Westbrook Garrison, if left alone they could pose a significant threat to Goldshire.

There have been rumors of murloc attacks near the rivers to the east of Goldshire, especially near Stone Cairn Lake, as well a fatal attack on two Stormwind guards. A report by Guard Thomas states that the murlocs pose a significant threat to Goldshire and are, at a minimum, affecting the region's fishing industry. There is a bounty on murloc fins placed by the Stormwind army.

Kobold clans have infested the Fargodeep and Jasperlode mines, forcing out the local workers. While they don't pose much of a threat to Goldshire, their foothold in Elwynn Forest will only grow stronger if ignored.

While not really a threat to Goldshire, the wolves and bears in the region are quite aggressive, especially in the area of the Eastvale Logging Camp and Stone Cairn Lake.

A bit to the north of Goldshire there is a house with skinning and leatherworking trainers. On the second floor of this house, six children can sometimes be seen forming the pattern of a pentagram, silent and unmoving. They will occasionally move out of the house to walk/run in a pentagram formation. They return to their house at around 7:40 in the morning, and at this time a soundfile will play something eerie, usually "You will die". Whether they make their rounds at other times of the day is unknown. Unconfirmed rumors also say they despawn at 8:00 pm.

To find all the quests available in Goldshire and elsewhere, check out the List of Elwynn Forest NPCs and also the Elwynn Forest questing guide. 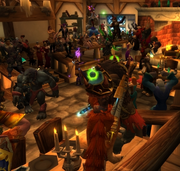 Lion's Pride Inn on an average night on Moonguard

Players from the server Moonguard have given Goldshire a unique reputation as a consistent role playing hub since at least 2008[7] with the most concentration within Lion's Pride Inn, where during most server hours hundreds of players can be found. Many players can be found here, outside of the inn dueling can usually be found while on the inside players engage each other in roleplay ( Usually through whispers, since all other forms of chat are usually filled nearly constantly due to the high amount of players. ) Some players try to make themselves as obtrusive as possible, using combinations of various toys or spells to make their model as large as they can in order to disrupt the experience of others and be silly.

In August of 2010, Blizzard deemed this an issue for new players creating humans and having to be exposed to this community, they have since then started to look for individuals breaking the Terms of Service through things like unwanted, unsolicited messages and dealing with them in private. Since then Blizzard has announced no further plans in regards to Lion's Pride Inn.[10]

In 2016 with the release of patch 7.0 Blizzard would give a reference to Goldshire inn as one of the possible results of the

Goldshire is also a 4-player map for The Frozen Throne called "Goldshire Map".[11] Its description is the following: "War and hunger have brought interlopers to Elwynn Forest, endangering the town of Goldshire. Sweep the woods free of this threat so that masons can begin laying the foundation of Stormwind." The town of Goldshire is in the center of the map and consists of a tavern.

Goldshire is heavily protected and patrolled by the Stormwind guards, has a goblin merchant and sports a population of 7,000 citizens — mostly farmers, miners, and traders. Its leader is Marshal Dughan.[12]

Goldshire is depicted close to its World of Warcraft incarnation, even to the locations of the guards. It still contains the Lion's Pride Inn.