The most feared soldiers of Ragnaros's elemental forces are the molten giants, and among them Golemagg the Incinerator is unrivaled for his sheer brutality and savage efficiency. So absolute is the molten behemoth's power that he has cowed two core ragers — offspring of the colossal beast Magmadar — which he now uses as pets. For this affront, he has earned Magmadar's eternal and unwavering ire, although the fearsome creature has yet to act on his savage impulses.[1]

Golemagg is a molten giant boss with 2 pet dogs, called Core Ragers, for guards of the Rune of Theri. 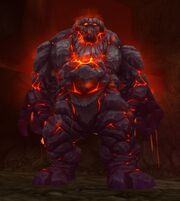 This is the most boring and uneventful fight in the whole of Molten Core. The main tank needs high fire resistance (to reduce the effect of the magma splashes), and healers need to pay some attention to their mana pools, since it's a rather long fight.

Two offtanks should fight the Core Ragers far away from Golemagg. The dogs can't die so there is no reason to DPS them, just keep them occupied. When they are out of range of Golemagg's buff, their horns will stop glowing red. When Golemagg gets to 10% life the melee should leave and he should be killed by ranged. It is often a good idea to have two tanks on Golemagg. If the main tank gets too many DoTs on him it will be simply impossible to keep him up. The second tank can either be ready to take over when the main tank dies, or when the DoTs start getting too high on the main tank the second tank can take over and let the main tank recover.

This fight is one of the few places where

[Curse of Weakness] is useful, as the two hounds are not killed themselves. The hounds also can provide a steady stream of health to warlocks via

Golemagg from a Hunter's Perspective